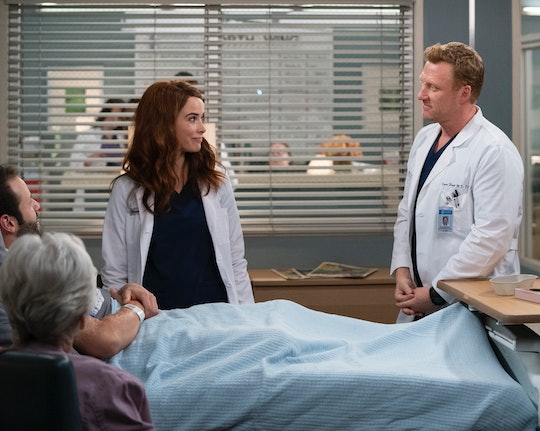 Megan Might Have Knocked Some Sense Into Owen On 'Grey's Anatomy'

No one tells you like it is quite like your sibling, so there was no getting around Owen’s mistakes as of late when Megan returned to Grey’s Anatomy tonight. As soon as she realized that he and Teddy aren't together despite obviously having feelings for each other, she called him out on his terrible timing, as per usual. And after Megan told off Owen on Grey’s Anatomy later in the episode, Twitter backed her up. She basically said everything fans have been saying for the past couple of seasons, so it was nice to feel justified in the collective annoyance of Owen.

She called him out for not fighting for Teddy after his one night stand with her in Germany. She demanded to know how Owen could fly back home, get back together with Amelia, and start a whole new family after finally hooking up with Teddy. And that seems to be the general feeling among most fans too.

Teddy and Owen don't have to be together just because they’re having a baby together, but there have always been feelings between them that go well beyond friendship. If Megan’s purpose on tonight’s episode was only to show Owen the right path to take, then hopefully it worked. Megan has always called Owen out on his mistakes and when she gave it to him straight on Grey’s tonight, there was a collective cheer for her on Twitter.

Most fans were just relieved that someone — anyone — had finally spoken some truth to Owen. He hasn't made the best decisions in the past couple of seasons and it was well past time someone finally called him out. And for once, Owen didn't blow up on the person telling him off, so maybe Megan got somewhere with him.

Other Grey’s fans on Twitter are legitimately disappointed that this was Megan’s only episode. Imagine how amazing it would be to have someone like her at the hospital every day to call Owen out and make him admit it when he’s wrong? He could also use someone to tell him when he makes poor decisions because he doesn't really have any good friends besides Teddy.

I don't see Owen going anywhere, but if his character were to be written off soon, this might be the perfect way to do it. Give him the happy ending he was never able to find with any of his previous relationships and let him and Teddy fly off into the sunset with their baby. Or, he could finally face his romantic feelings for her and vice versa and they can stop with the back and forth already.

Ever since Teddy’s return this season, Grey’s Anatomy has partially been The Owen Hunt Show. His love triangles with Teddy and Amelia and now with Teddy and Koracick have taken center stage more often than not. And as much as I want him to find happiness, the storyline is starting to get a little stale. Some fans feel the same way and they hope Megan’s rant was a wake up call for Owen. Because let’s face it — the guy definitely needed one.

Teddy has always had a *thing* for Teddy, even when he was married or dating someone else. She has inadvertently come between Owen and other women on the show and now, in Season 15, it’s time to put that to rest. I wouldn't be surprised if Owen and Teddy’s storyline is dragged on for a few more episodes until they definitively decide if they are going to be together, but Megan’s surprise visit could have been just what Owen needed to get his head on straight. Now all he has to do is figure out how to tell Teddy what he wants.