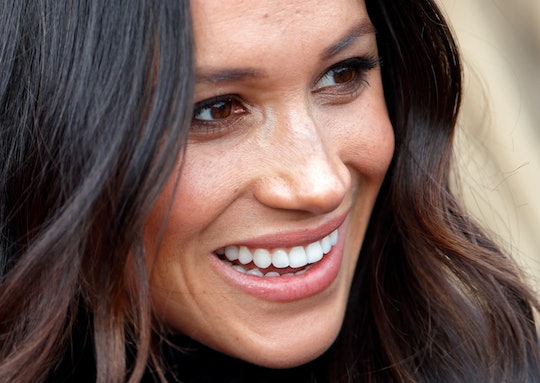 It's a rare thing to get a glimpse of the Duchess of Sussex these days, so when Meghan Markle debuted a new, longer hairstyle during an empowering Woman In Leadership speech, you'll have to forgive people for freaking out just a little.

On Tuesday, Markle took part in the Girl Up Leadership Summit, where she remotely joined other powerful women like Michelle Obama, Hilary Clinton, and singers Chloe x Halle to encourage young women to advance their skills and become leaders in their communities.

The Duchess of Sussex has been living in Los Angeles for the past few months with her husband, Prince Harry, and their 1-year-old son, Archie, according to The Los Angeles Times. The family of three has been keeping an especially low profile since announcing their decision to step back from their senior royal roles in January and left the United Kingdom, which has meant the Markle sightings her fans crave have been few and far between.

And when Markle joined the Woman in Leadership summit to give her speech on Tuesday, she sported a new long hairstyle, parted down the middle and with longer layers. No big surprise, but she looked incredible. As one fan observed, "My good sis was serving good hair, good color and a good word. It’s amazing to know your purpose and to live in it!!"

And, of course, her speech was 100% worth a listen, too. During her address, Markle spoke to the young women who took part in the summit about the importance of doing what's right "even if it scares you," and admitted she has struggled with this in the past.

"Often, it’s fear that paralyzes us and stops us from being brave and being bold," Markle said. "But don’t underestimate that you have some of the answers. Don't underestimate your ability to push through the fear. You have, rooted in your convictions, the ability to craft a world that you know is just and kind. Your gut will tell you what's right and what's wrong; what's fair and unfair. The hardest part — and it was the hardest part for me — is to chase your convictions with action."

"I will be cheering you on," Markle concluded her speech. "So will my husband and so will Archie as you all continue marching, advocating, and leading the way forward."

This isn't the first time in recent months that Markle has spoken to young women about taking action to do what's right. She and Prince Harry spoke to members of the Queen's Commonwealth Trust about being "a little uncomfortable" when working toward greater equality.

And in June, the former actor spoke to the graduating class of her alma mater, Immaculate Heart High School, about systemic racism amid the Black Lives Matter protests. During that speech, she told the graduating class that they would have to "lead with love and compassion and use your voice in a stronger way than you have ever been able to."

Meghan Markle's new hairstyle looks great, yes, but her message sounds even better. Take action. Do what's right. Even when it's difficult.