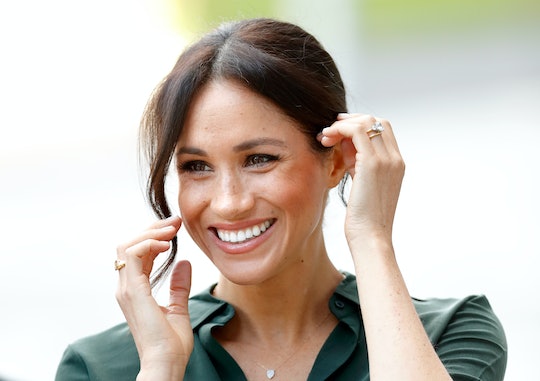 Meghan Markle Is Cold-Calling Voters & Introducing Herself As "Meg"

Imagine you're just hanging out at home, waiting patiently for your take-out pizza to arrive or whatever, and then your phone rings. And you are pretty certain you recognize the smooth tones of a certain duchess who relocated to the U.S. but you tell yourself it's impossible. Wrong. As it turns out, Meghan Markle is cold-calling voters ahead of the 2020 presidential election along with her pal, feminist icon Gloria Steinem.

Steinem spoke to Access Hollywood recently about her newly formed friendship with the Duchess of Sussex and their shared desire to see people get out to vote this November.

"Meg is herself, smart, authentic, funny, political. She came home to vote," Steinem told Access Hollywood during a virtual interview on Sunday. "And the first thing we did and why she came to see me was we sat at the dining room table here — where I am right now — and cold-called voters. And said, 'Hello, I'm Meg,' and, 'Hello, I'm Gloria,' and, 'Are you going to vote?' That was her initiative."

So if you have gotten a call from someone who just said their name was Meg and asked if you were going to vote, I hope you were friendly because it might have been the Meghan Markle.

Back in August, Markle and Steinem first got together to discuss feminism and politics in a video for MAKERS Women, a feminist organization dedicated to promoting "women who make America," filmed in the duchess' backyard. During their chat, Markle spoke about her excitement to see Sen. Kamala Harris on the Democratic ticket as the vice presidential nominee. "I'm so excited to see that kind of representation," Markle said. "You know, for me, being biracial, growing up, whether it was a doll or a person in office, you need to see someone who looks like you in some capacity."

Markle was open about her political beliefs long before she became the Duchess of Sussex when she married Prince Harry in 2018 and gained an international platform. Back in 2016, for instance, when she was an actress on the show Suits, she spoke to Larry Wilmore on The Nightly Show about that year's presidential face-off between Donald Trump and Hillary Clinton, and she had some choice words to say about the man who would become the 45th President of the United States.

"Yes of course Trump is divisive. Think about just female voters alone," Markle told Wilmore. In that same interview, she also called Trump "misogynistic" and said that he made it easy to see that "you don't want that kind of world" in which he would be president.

Meghan Markle is going above and beyond to make sure everyone votes. You never know, keep your ringer on loud just in case your number makes it on her list.