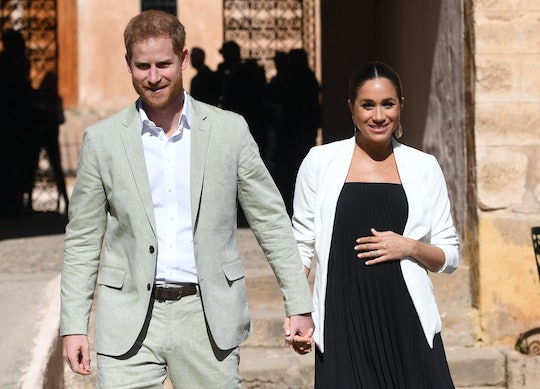 Meghan Markle and Prince Harry are expecting their first baby this April and as luck would have it, so am I. Naturally I want to know every detail of her pregnancy, and thankfully I'm not alone. The latest news on the royal baby front? The proud parents have officially picked their nursery paint, and it's vegan (interestingly enough). Yes, vegan paint is apparently a thing, and yes, I obviously must know more. I checked out a few different vegan paint options to figure out what exactly makes them "vegan"... and once again, I may be a royal copycat.

While I've been eating a vegan diet for three years now, I'm the first to admit the transition to a vegan lifestyle has been a slow one. You may as well revoke my vegan card now, because I definitely wasn't even aware that paint could be vegan or non-vegan. Daniel Brooks, co-owner of the company Painting Columbus, explained to Better Homes & Gardens what distinguishes vegan paints from others. "Most people might not realize that standard paint includes many animal products such as casein, which is the primary protein in milk; shellac, which is a resin secreted from the female lac bug; and ox gall, which comes from cows," Brooks said. Head into any home improvement store, and the large majority of paints for sale will either contain an animal-derived ingredient or an ingredient that has been tested on animals.

So, which paint did the royal parents-to-be go with? Meghan and Harry have opted for a paint from the brand Auro, as anonymous sources told The Sun. Per the brand's website, "Our products contain 99 percent natural raw materials that come from environmentally managed sources and are produced using a sustainable ecological cycle." While all of the paints are eco-friendly, not all of the brand's paints are vegan. Currently, the only available vegan Auro paint for U.S. customers is No. 524 in standard white. However, that's reportedly the color Meghan and Harry chose for their gender-neutral nursery, anyway!

Premium Wall Paint No.524
AURO
If you're looking for a high-quality and simple white, the Auro 524 is an excellent vegan option. The website states that it has a "pleasant smell" (that goes away once dry) and good hiding power, meaning it can cover all the usual surfaces, from old vinyl paints to new plaster. It's natural, non-toxic, washable, and should only require one coat (hallelujah). This price gets you five liters.

Of course, not everyone wants a white nursery. Luckily, there is a brand that carries vegan colors called Unearthed Paints. The Unearthed brand offers a variety of vegan-friendly products, from wall paints to wood finishes, and the brand is incredibly transparent with the ingredients used (white clay, marble flour, cellulose fibers, vegetable casein, diatomaceous earth, soda, methyl cellulose, and earth and mineral pigments, in case you're curious.) In fact, according to Unearthed Paint's FAQ, only two of their products are not fully-vegan: the Safflower Wax and Vega Primer.

Their most popular paint is their Clay Paint, which is a bagged powder that you mix with water when you're ready to paint. The coolest thing about purchasing powder pigments like this is that you can completely customize your hue to create the exact color you've been envisioning. Pick up a bag of pigment alone to create a darker shade, or add pigment to a bag of white powder to dilute the color to a softer shade. Painting with Unearthed Paints is a bit of an art project, but the payoff is a color perfectly tailored to your tastes.

Clay Paint
Unearthed
This clay paint from Unearthed is suitable on plaster, stone, concrete, wallpaper, drywall, and fibrous plaster boards, and is 100% zero-VOC, biodegradable, and vegan. It comes in seven premixed colors that can be used as-is, or customized even further by using the pigments to tint the white Clay Paint.

Who knew the "Meghan Markle Effect" would extend to vegan nursery paint?