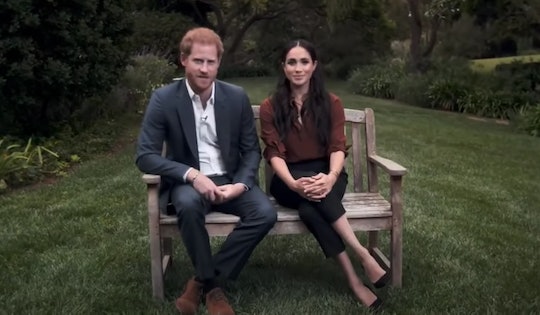 During a rare appearance on TV, Meghan Markle and Prince Harry stressed how important voting is every election, but especially this year.

"We're just six weeks out from Election Day and today is National Voter Registration Day. Every four years we're told the same thing that 'this is the most important election of our lifetime.' But this one is," Markle told viewers during ABC's TIME100 special on Tuesday, which honored TIME Magazine's annual list of the year's most influential people. "When we vote, our values are put into action, and our voices are heard. Your voice is a reminder that you matter because you do and deserve to be heard."

Prince Harry — a U.K. citizen and member of the British royal family who's been expected to remain "neutral" on political matters — shared during the special that although he's never been able to vote in his "entire life," he believes it's "vital" everyone is mindful of the information they're consuming as the election nears. He, Markle, and their son Archie relocated to the United States earlier this year after stepping down from their senior royal duties.

"As we approach this November, it is vital that we reject hate speech, misinformation, and online negativity," Prince Harry said.

As for Markle — who had to "remain apolitical" like her husband as a senior member of the royal family, according to Town & Country — she has since confirmed that she will be voting this November, telling Marie Claire in August that she believes it's a "fundamental right" to do so. "I know what it's like to have a voice, and also what it's like to feel voiceless," the Duchess of Sussex told the magazine. "I also know that so many men and women have put their lives on the line for us to be heard. And that opportunity, that fundamental right, is in our ability to exercise our right to vote and to make all of our voices heard."

Beyond TV appearances and interviews, Markle has also mobilized her efforts to encourage others to vote. Earlier this week, feminist icon Gloria Steinem told Access Hollywood that the she and Markle have been cold-calling voters. "She came home to vote," Steinem told Access Hollywood. "And the first thing we did and why she came to see me was we sat at the dining room table here — where I am right now — and cold-called voters. And said, 'Hello, I'm Meg,' and 'Hello, I'm Gloria,' and 'Are you going to vote?' That was her initiative."

While Markle has not stated who she will vote for this November, she did tell Steinem during an interview in August that she is "so excited" about Democratic Vice Presidential nominee Sen. Kamala Harris. "The heart of the Democratic party has been Black women, actually, and now there is a potential Vice President who is Black, and that's so exciting," she said.

The Duke and Duchess of Sussex concluded their call to action with a poignant message from Prince Harry. "Tonight reminds us of how important it is to watch out for each other, to care for each other, and to inspire each other," he said. "We are incredibly proud to join you in this important moment in time."