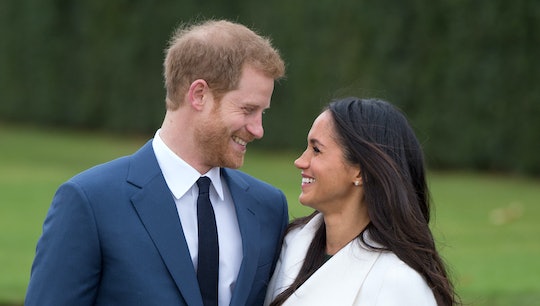 While it won't surprise anyone to hear this, it sounds like Meghan Markle and Prince Harry celebrated their wedding anniversary with some sweet and sentimental gifts for each other. Earlier this week, on May 19, the couple marked two years of marriage and apparently did so in some thoughtful ways.

Of course, the Duke and Duchess of Sussex did not share photos or speak directly with the media about their special day, but a source told Us Weekly that they got each other romantic and "heartfelt gifts" for their anniversary. Prince Harry reportedly surprised Markle with a "stunning bouquet of roses" and bought her a ring that she apparently "loves," according to Us Weekly. If that's true, it sounds like rings might be Prince Harry's preferred gift for his wife. Last year, according to People, the Duke of Sussex reportedly gave Markle a diamond eternity ring for their first wedding anniversary.

As for Markle, she reportedly went for the handmade option. According to the source who spoke with Us Weekly, she reportedly designed a card for Prince Harry for their second wedding anniversary and wrote him a "beautiful, sentimental message."

The Duke and Duchess of Sussex, who tied the knot two years ago on May 19, 2018 at St. George's Chapel on the grounds of Windsor Castle, reportedly celebrated their second wedding anniversary with their son, 1-year-old Archie, at home in Los Angeles, according to People.

Another source who claimed to be close to the Sussexes told Harper's Bazaar that Prince Harry and Markle did not schedule work calls or meetings on their anniversary, reportedly choosing to spend "quality time with one another and as a family."

If you're one to follow tradition, then you know that the second wedding anniversary is typically reserved for gifts made out of cotton or china, according to Brides. Cotton represents how a couple is interconnected yet flexible and china represents the strength and fragility of the relationship. But Markle and Prince Harry aren't afraid of bending tradition and protocol to create traditions of their own. And while a new robe or platter are nice gifts, a handwritten note and a beautiful ring seems very on-brand for the Duke and Duchess of Sussex.