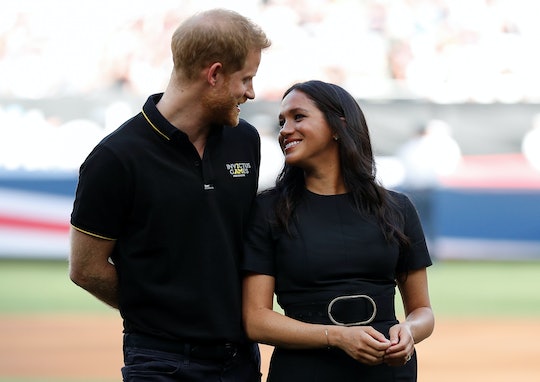 The Duke and Duchess of Sussex enjoyed the most epic date night on Sunday when they attended the European premiere of The Lion King in London together. It was an incredibly glamorous event, with loads of celebrities, like Pharrell Williams, in attendance. And, at some point during the fun evening, Meghan Markle chatted to Pharrell about her marriage, providing a rare glimpse into her new a life as a royal.

Markle gave birth to the couple's first child, baby boy Archie Harrison Mountbatten-Windsor, on May 6 and began her maternity leave immediately after. Although it's reasonable to assume she has been enjoying her time at the family's newly renovated home at Frogmore Cottage on the grounds of Windsor Castle during this period, it also makes sense that she would want a night out with her husband. The couple were only just married in May 2018, after all, and they deserve some personal time too.

The couple's private time, however, wasn't so private as they spent the night surrounded by the stars of the new live-action remake of The Lion King, including Billy Eichner (Timon), Seth Rogen (Pumbaa), and Donald Glover (Simba).

Oh, and please don't forget Beyoncé, who voices the lioness Nala. Luckily for everyone watching at home, Markle shared a hug with Bey in what was the most epic moment ever. It was really something, folks.

Beyoncé wasn't the only person to get a little personal (in a lovely way, of course) with Markle. Musician Pharrell Williams, who contributed to The Lion King soundtrack, was also on hand to greet the royal couple. After Prince Harry sweetly complimented Pharrell's shorts, the musician told the couple, as Hello! reported:

So happy for your union. Love is amazing. It's wonderful. Don't ever take that for granted but what it means in today's climate, I just wanted to tell you it's so significant for so many of us. Seriously. We cheer you guys on.

Markle reportedly responded, "Thank you, they don't make it easy."

This might seem like an off-the-cuff remark, but the Duchess of Sussex has made it a policy to avoid discussing her marriage in public. Despite the overwhelming and daily criticism she receives from the British tabloids, even down to how she holds her own baby, Markle remains dignified and stoic in the face of adversity. For her to acknowledge any awareness that this scrutiny exists speaks volumes.

It's important to note here that the Duke and Duchess of Sussex have only been married one year. The two are currently in the midst of what can be a difficult point in marriage, as they're probably still learning a lot about one another. And it's not fair that, during this sensitive time, they have been attacked for every decision they make or don't make. Based on Markle's reported comment, it's clear the public scrutiny hasn't been a walk in the park.

But that all being said, the Duke and Duchess of Sussex seem to be going strong despite everything. Happy together and trying to figure out their lives. Because while the critics might not make things easy, they don't matter much either.