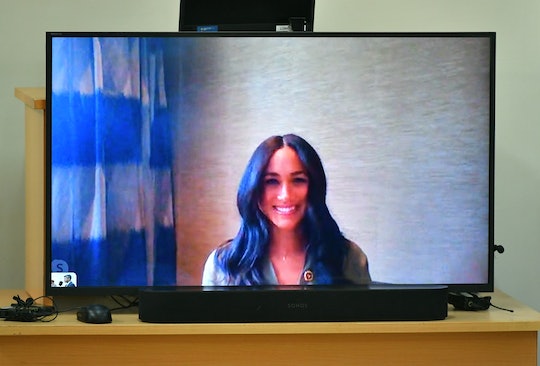 Meghan Markle and Prince Harry do so much on their own. And when their adorable 5-month-old, Archie, sleeps, they can basically conquer the world. Over the weekend, Meghan Markle joined a Skype call with Prince Harry while Archie slept, proving that those few hours of nap time are absolutely critical for getting things done.

Any seasoned parent knows that magic happens when their babies go down for a nap. These hours (or minutes, depending on the baby) are the perfect time for parents to shower, clean their home, get some work done, or just get some much needed moments of rest. But there was no resting for Markle. On Sunday, Markle used her son's nap time to (virtually) join her husband at a school in Malawi.

Prince Harry made a visit to the Nalikule College of Education where he met with young women who attend the school on scholarship supported by the Queen's Commonwealth Trust through CAMFED — the Campaign for Female Education, according to People. This is a cause that is very dear to Markle's heart — she's the Vice President of the trust, according to Town & Country, and is a lifelong advocate for women's rights. But, Markle couldn't be there with her husband, according to E! News, so she Skyped in, and said some super encouraging words to the young women.

"We're just so proud as president and vice president of the Queen's Commonwealth Trust that we can support you in everything that you do because we cannot begin to express how valuable and vital that work is, we're just incredibly proud to be part of it," she said, according to E! News.

"I wish I could be with you, we're in South Africa right now Archie's taking a nap. I'm with you in spirit."

Nap time is some seriously precious time that Markle knows how to use wisely. If only everyone was able to accomplish as much as she can while their babies take naps.

This was definitely one visit that Markle would have loved to be a part of. Especially since Markle is a staunch advocate for women's access to eduction, according to Good Morning America. During Prince Harry's trip to the school, he got to meet with leaders in the education committee, along with CAMFED alumni, and see first hand how the Queen's Commonwealth Trust has been able to change lives, according to the Sussex Royal Instagram account — something that sounds right up Markle's alley.

But Skype was the only way that Markle could have been there for Prince Harry's visit. Markle is currently with Archie in South Africa while Prince Harry travels on his own to other parts of Africa, according to People, visiting charities and meeting new people along the way.

But Prince Harry won't be away from his family for too long. He will reunite with Markle and their son on Wednesday, before they embark on a trip to Johannesburg, as a family, according to The Sun. This trip to Africa has been such a fun time for the family. During a trip to Cape Town, South Africa, earlier in the week, Archie got to accompany his parents on an official royal visit with Archbishop Desmond Tutu, according to Town & Country.

There is no telling what the next few days of their trip will bring — whether it's the couple accomplishing even more things while Archie naps or bringing him along for the ride.