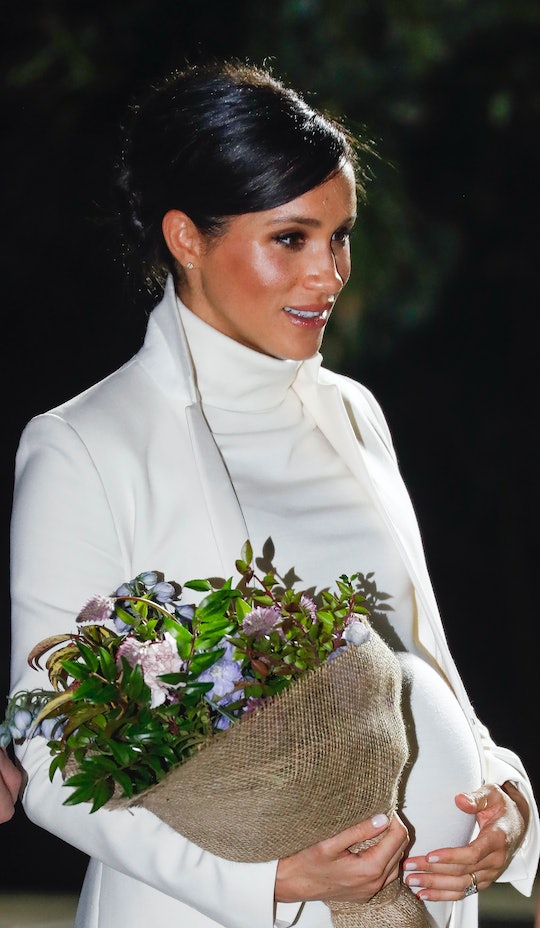 There's nothing we don't want to copy when it comes to Meghan Markle and her pregnancy style. Between sticking to her classic messy buns, rocking monochromatic outfit sets and looking into hypnobirthing, it's clear that the newly minted royal has some pretty stellar taste. That's why everyone's jumping at the fact that Meghan Markle's crib from her baby shower is still for sale, and there's a way to order it online.

Just yesterday, The Cut reported that Markle was able to catch up with some old friends at the end of a trip to New York. Her group of girlfriends threw her a small baby shower, which is pretty on par with what we imagine to be Markle's tastes. However, it was during that event that the world was able to get a glimpse of some of the beautiful gifts Markle was given, including the coveted crib.

In fact, HELLO! was even able to publish some photos of the Babyletto Hudson crib being delivered to the hotel where Markle was staying. We know the details because of the labeling on the outside of the box: Markle's choice for her new baby is a 3-in-1 convertible crib/toddler bed/daybed. The company's website notes that the item is mid-modern in design, features rounded spindles and an open silhouette, and is eco-friendly, non-toxic, and GREENGUARD GOLD certified. On top of being responsible and chic, it's also practical: the bed transitions into a toddler bed or daybed, for when the littlest royal starts to grow up.

If you'd like one yourself, you can order it through the Babyletto website, for about $379 before taxes and shipping. It also comes in a variety of colors, including whites, woods and greys.

It's pretty sweet to see Markle accepting gifts for her new baby, because TBH, pregnancy is an exciting time, and the people in your life will always want to shower you with loving and sentimental gifts to help the transition go more smoothly — even if you are technically a royal with access to pretty much whatever you want.

In fact, Markle is not having one but two baby showers, Harper's Bazaar reported, and the next one will be in her now home city of London. This is interesting because the royal couple has a unique relationship with the concept of receiving gifts. In fact, Marie Claire reported that, after their wedding, the couple received an estimated total of $9 million worth of items, but returned them all.

Prior to the wedding, the couple released a statement specifically requesting charitable donations to be made in lieu of gifts, the magazine reported:

"Prince Harry and Ms. Meghan Markle are incredibly grateful for the goodwill shown to them since the announcement of their engagement and are keen that as many people as possible benefit from this generosity of spirit. The couple have therefore asked that anyone who might wish to mark the occasion considers making a donation to charity, rather than sending a wedding gift.

Of course, ultimately, the gathering for a baby shower signals the welcoming of a new person into a family, and for Meghan, it's probably a symbolic event more than anything. We're confident she wants to celebrate with friends she doesn't often get to see, and it just makes the reality of her actually giving birth seem all the more close.

Previously, the Duke and Duchess of Sussex announced that they'd be expecting their first baby "in the Spring," which is vague, but Cosmopolitan reported that in conversations, Meghan has been heard revealing how far she was along, meaning that she is most likely due to deliver around the end of April. With the months flying by, it's an exciting time for everyone.