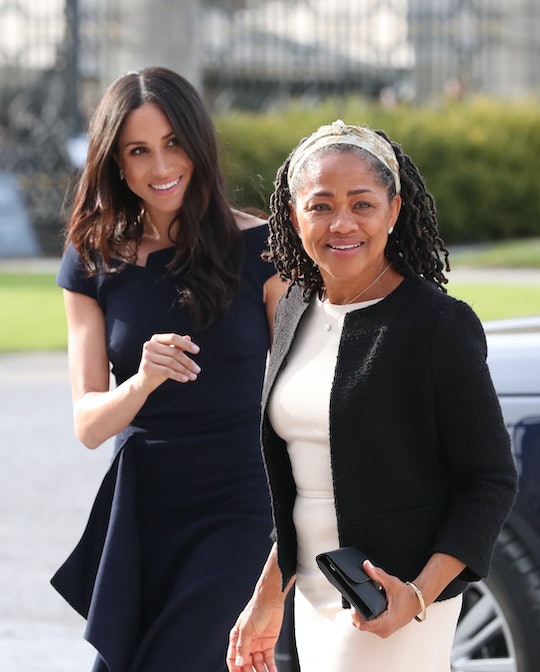 As the Duchess of Sussex settles into her new life in Los Angeles, it sounds like she has a little help with the transition. Beyond her husband Prince Harry, of course. According to a new report, Meghan Markle's mom is apparently helping raise Archie as a live-in grandma and yes, this is exactly the dream for so many busy moms who need extra special help.

Markle and Prince Harry moved to her hometown of Los Angeles back in March, as Vice reported, with their baby boy Archie, who is now 1 year old. Due to the coronavirus lockdown, neither Markle nor Prince Harry have been seen in public for quite some time and little was known about their life in California after stepping back from their senior royal duties earlier this year.

While they're continuing to keep a low profile, it seems they have a new member of their household to give them a hand with their little boy. Us Weekly has reported that Markle's mom Doria Ragland has moved into their home in an effort to be closer to her grandson. A source told the magazine that Ragland "continues to live with Meghan, Harry and Archie" and "this has been the most time she has spent with her grandson since he was born.”

That would certainly make sense considering little Archie was born last May in the United Kingdom, back when his parents were still senior members of the royal family living in Frogmore Cottage on the grounds of Windsor Castle. How time flies.

So what does Ragland — a former yoga instructor and social worker, according to the Daily Mail — do to help Markle and Prince Harry with Archie? According to Us Weekly, she reportedly gets up in the morning and reads to him. Not to mention the fact that she and Markle — a bestselling cookbook author herself, as Marie Claire reported — have apparently been making the little boy organic food, according to Us Weekly. Sounds like Archie is really living the life with his parents and grandmother.

While neither Markle nor her mother have confirmed that they are indeed living together, it certainly would make sense that Ragland would want to be close to her daughter and grandson. When Archie was born in May 2019, Ragland released her own statement through the royal family about the birth saying that she was "overjoyed" by her grandson and the royal family's official Instagram post noted that Ragland was staying with the couple at Frogmore Cottage at the time.

Since Markle and Prince Harry are reportedly living in Tyler's Perry's eight-bedroom mansion at the moment, as Entertainment Tonight reported, it's not as though there isn't ample space for Ragland. Us Weekly quoted a source as saying, "Doria has her own quarters and whilst a few of Harry’s chums have been ribbing him about living with his mother-in-law, he has a brilliant relationship with her."

Markle's life and relationship with her mom sounds like a dream come true. Enough space to have a little independence, but someone you trust implicitly to help with your baby. Not bad if you can pull it off.