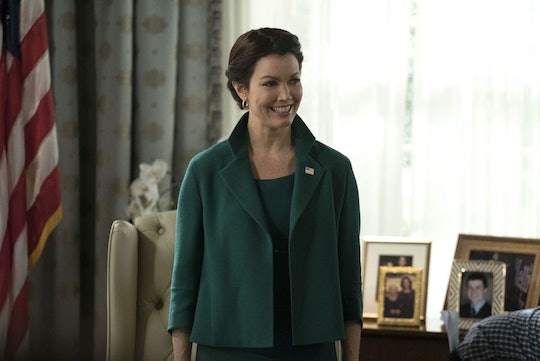 Mellie's Speech On 'Scandal' Is Something We All Needed To Hear

She pointed out how so many men find it hard to see past the strength in powerful women and therefore can't bring themselves to be with strong women in general. Mellie's speech about powerful women touched on so many excellent and too true points that everyday women deal with regularly. Like how lonely it is to be true to your ambitions and goals, but also sometimes give up relationships with men because they can't handle those aspirations. Of course this isn't true with every relationship, but in Mellie's case, that's her new reality and for other women, that's a daily struggle. And honestly, I'm here for it. Though I'm also here for Mellie, POTUS herself, saying, "There's a famine in my lady bits!" So there's that.

Thursday's episode of Scandal as a whole touched on what fans expected and hoped to see once Mellie was elected as president last season. From Mellie's speech about women in power, we finally got to see how being the president and achieving all she'd set out to do is actually lonely for her at the end of the day. And not because she's so busy with foreign policy meetings, but because she knows the harsh reality of failing to find a man who can handle being with a woman with power and ambitions. When Mellie said, "I'm not just POTUS. I'm single female POTUS," she was definitely all of us, but without the POTUS part.

Other than touching on something that's already true for women in real life, Mellie's speech on Scandal also helped show viewers that her friendship with Olivia is the real thing now that there are no men between them and now that they've both come so far politically and professionally. And, as someone pointed out on Twitter, Mellie's Oval Office reflects how important powerful women are, since she has a framed painting of Victoria C. Woodhull, a leader of the women's suffrage movement.

I'll admit that it was nice to see Olivia and Mellie genuinely laughing for once and enjoying a moment together that wasn't about nuclear weapons or leaders of other countries. But Mellie's entire speech was so important and a long time coming from a character who had to stand behind the former president for years before making it into the Oval Office herself.

Many of us in the real world don't have an entire country on our shoulders or the kind of pressure Mellie has on Scandal, but most of us can understand the dilemma of being a women in power or with ambition who is faced with men who can't handle any of that. If this is the kind of monologue we're going to get from Mellie for the rest of the season, then I think I'm in love with Scandal's new president.