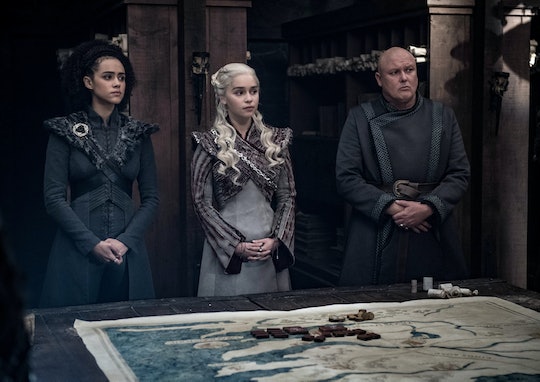 Game of Thrones is nothing if not a show that pays extreme attention to detail. With a fan base that picks apart every interaction and every scene for new theories or explanations, the show has to be diligent in crossing all T’s and dotting the I’s. But somehow, a Starbucks cup made its way onto set during Season 8 filming and someone left it on the banquet table in Winterfell. And the memes about the Starbucks cup on Game of Thrones prove that nothing gets by fans' eagle eyes. I’m not talking about theories about Varys somehow getting the iron throne or clues about Arya being the waif for two seasons in a row. This is something that you can't really dispute or defend, other than to say that it happens and the Game of Thrones crew is allowed one little mess up in a series of golden television programming.

I consider myself something of a Game of Thrones fanatic and somehow I missed the cup in the background of the scene until I re-watched the first scene of last night’s episode and saw the signature white cup in all of its glory. Maybe a member of the crew left it behind while they shot the episode or Kit Harington or Emilia Clarke needed a little pick me up during the two years it took to film the final season. But it’s there and there is no getting around the fact that either someone forgot to clean it up or Westeros got a Starbucks.

Obviously Westeros didn't really cross over into the real world and add a Starbucks to Flea Bottom so Cersei could finally get caffeinated and out of her perpetual bad mood. But it would be kind of amazing if that did happen. If there’s one thing Littlefinger’s brothel needs next to it, obviously it is a brand new Starbucks.

Some fans joked that it was actually Daenerys’ cup and that Starbucks cashiers had a big task in writing her name on her Starbucks coffee cup. It’s hard for some Starbucks baristas to remember the proper spelling to everyone’s real life name since they hear so many all day long. Imagine writing Daenerys’ entire title on her cup. I don't think it would even fit.

Other fans said that maybe this was how Game of Thrones afforded such a huge budget for its final season. Honestly, it’s no secret that HBO places a lot of eggs in its Game of Thrones basket, so I highly doubt this was intentional. It definitely makes you think, though.

Although the cup left behind in the scene was a shock for most viewers, these little Easter egg TV mess ups are the things a lot of fans live for. Everyone loves when Saturday Night Live actors break character in their scenes or when you can spot a piece of equipment in the background of a shot in a movie or TV show. Even though Game of Thrones fans' standards are insurmountably high, Starbucks-gate is totally forgivable.

No one from the show has come out to explain or claim the cup as their own just yet. The Starbucks cup on Game of Thrones just might be one of the biggest talking points of the final season, though. Forget Theon's death and Cersei displaying mad queen antics to rival Daenerys'. The Starbucks cup will probably be remembered as the one big Game of Thrones set mess up of the series.

If you can look past the Starbucks cup, however, Game of Thrones Season 8 has been epic so far. And now that we are in the homestretch, I think it’s OK to let the cast and crew slide for getting one measly Starbucks coffee cup onset when they filmed the final season. As long as the finale is a big time payoff, I think all will be forgiven.