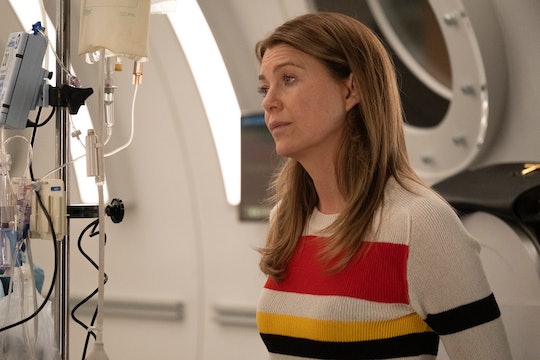 Meredith's Career Could Be Over On 'Grey's Anatomy'

The Grey's Anatomy Season 15 finale didn't end with a death or a natural disaster resulting in one of the main characters' lives hanging in the balance, but it did set things up for a complicated next season. DeLuca originally took the fall for Meredith's insurance fraud, but being a total boss, she wasn't having that. Neither was anyone else who was sort of involved in the incident. And now that Meredith got fired with Alex and Richard on Grey's Anatomy, fans want to know what happens next. I don't see much of a future with the show if four of the star surgeons are no longer employed at Grey Sloan Memorial Hospital.

It was pretty noble of Richard and Alex to throw themselves under the bus in an attempt to save Meredith, but as Bailey pointed out, this was different from the time the interns cut Denny's LVAD wire back in the day. This time around, Bailey had no choice but to take serious disciplinary action against Meredith and the others, so she wasted no time in firing them. It was definitely a blow and I honestly don't know how any of them will come back from this next season.

It's almost impossible to think that Meredith, DeLuca, Richard, and Alex are going to be fired from the hospital forever. I can't even see Meredith doing real jail time. She's one of the stars of the show. It just doesn't work if she isn't front and center with her closest medical colleagues. But fans are still worried about Meredith and the others nonetheless.

Grey's Anatomy didn't end with a big death this season, but it did leave off with an epic cliffhanger that places Meredith, DeLuca, Alex, and Richard's careers in the balance. Meredith seemed confident that she has the money, clout, and resources to make this case go away for her and maybe that's true. Catherine might not allow Bailey to just hire all of them back so easily. however, and that might be their biggest obstacle next season.

Grey's Anatomy fans are rightly concerned about what will happen to Meredith and the others now that they have been fired. I'm sure next season will start off with them having been away from the hospital for several months, but I don't see this being a permanent thing. It is, however, going to be interesting to see how Meredith gets her job back and avoids serious jail time for committing a felony at the hospital. But this is Grey's and I think we can suspend our collective disbelief just a little bit.

Despite Meredith potentially ruining her career and those of Alex, DeLuca, and Richard, fans are still rallying behind her. She broke the law, but she did it because she saw a greater injustice if she didn't take matters into her own hands. You can't help but admire that.

Some fans don't believe that Meredith, Richard, DeLuca, and Alex are really going anywhere, though. These are four main cast members and while they don’t necessarily have to be doctors to be part of the cast, they do have to be surgeons at Grey Sloan Memorial Hospital to remain relevant on Grey's Anatomy. It just wouldn't make sense to permanently fire all of them.

The most likely scenario is that they will remain out of work for the first few episodes next season as they fight to get their jobs back. I don't see the four of them permanently fired from the hospital, however, so they might just have to climb this hurdle before they can put this incident behind them. And although I have complete faith that they will get through this, the way it looks right now, it still won't be easy to come back from it.