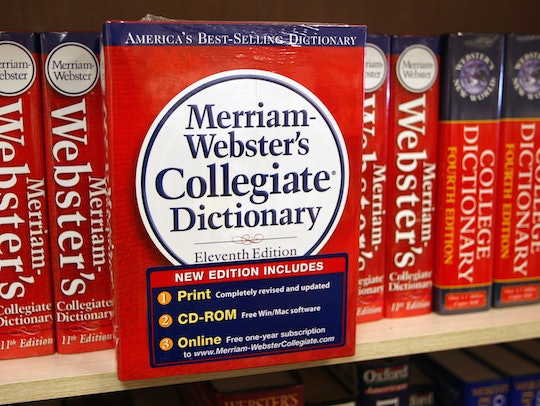 Merriam Webster's Word Of The Year Is SO Accurate For 2018

This year has been a bit of a doozie — from dire environmental reports and political scandals to presidential missteps and oh so much more. You could some it up in a few words, but only one was the most fitting. And with the release of Merriam Webster's Word of the Year, it's pretty telling of 2018's overall theme. The word "justice" won by a long shot. Indeed, Merriam Webster's word of the year couldn't be more accurate.

The word "justice" was looked up 74 percent more in 2018 than in 2017, with spikes tied to some of this year's most talked about events, according to CNN. "The concept of justice was at the center of many of our national debates in the past year: racial justice, social justice, criminal justice, economic justice," Merriam Webster said in an official statement. "In any conversation about these topics, the question of just what exactly we mean when we use the term justice is relevant, and part of the discussion."

Merriam Webster uses two criteria when choosing the word for 2018: the word must sum up the overall feel of the year and it must be one of the most searched words during this period, according to TIME.

Just thinking about the word "justice" brings to mind some of the year's biggest news stories. You can't talk about justice without talking about the Mueller probe into Trump's 2016 presidential campaign and possible collusion with the Russians, according to Politico.

Is it a coincidence that Merriam Webster announced "justice" as the word of the year just days after, as CCN reported, President Trump's lawyer, Michael Cohen, was sentenced to three years in federal prison? Who knows.

And what about Brett Kavanaugh's journey to the Supreme Court, according to Business Insider, and the sexual assault allegations, which he's denied, made by his former classmate Christine Blasey Ford? While it didn't stop him from becoming a Supreme Court justice, it certainly turned the public's eye towards the plight of justice for sexual assault victims, according to The New York Times.

The word also saw a surge in look ups after each of Kim Kardashian's two White House visits, NBC News, where she discussed social justice with President Trump. (You didn't think you could get away from the Kardashians that easily, did you?)

"Justice" was also used as a rallying cry for protests and marches held all over the United States in 2018 as people called for economic, social, racial and voter justice, according to TIME.

Merriam Webster wasn't the only one to announce its word of the year; Dictionary.com's word of the year was "misinformation" and Oxford Dictionary chose "toxic." It's not hard too see that most of the fodder for these words are political in origin.

“We are not editorializing. We looked at our data and we were ourselves surprised by this word,” Peter Sokolowski, Merriam-Webster’s editor at large said to The Associated Press. “This is a word that people have been thinking about for this entire year.”

Of course there were a few runners up — nine more to exact, according to Merriam Webster. Some of them included respect, excelsior, and feckless. Two of those top words were related to losses; in May, Aretha Franklin, the Queen of Soul, died, and her obituaries and dedications all mentioned one of her most iconic songs — "Respect" — which made it one of the most looked-up words this year.

Excelsior also made the list after the passing of Marvel comic book legend, Stan Lee. "Excelsior!" was his catch phrase, so it had many people running to the dictionary to delve deeper into his most used saying.

And late night political talk show host Samantha Bee made "feckless" popular as she used it to harshly criticize Ivanka Trump, according to Deadline. Feckless is a synonym for useless or meaningless, according to Merriam Webster.

Aside from its word of the year, Merriam Webster also added a slew of new words in 2018 that also reflect where we are as a society. Predictive, bingeable, airplane mode, adorbs, fav, and rando were among the 840 words added this year, according to Mental Floss.

Justice, toxic and misinformation are very telling words when juxtaposed against the current state of the nation. There's no telling what 2019 has in store, but here's hoping for a bit more positivity in the new year's top word from Merriam Webster.