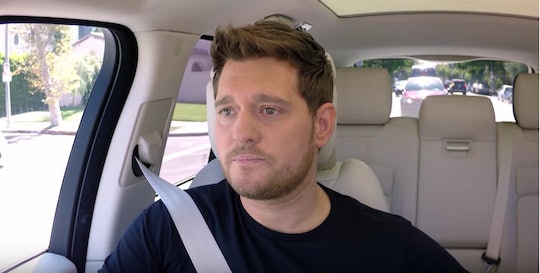 This time of year — the time between Halloween and the holiday season — is when my family starts cranking up the Christmas music. Because few things in life bring me as much joy as listening to Michael Bublé Christmas songs. It's just so festive and cheerful — and I can't help but sing along (poorly). As plenty of Bublé fans already know, the crooner has remained out of the spotlight for a good portion of the past two years following his 3-year-old son's cancer diagnosis. And recently, Michael Bublé got emotional with James Corden following his son's cancer battle.

As E! Online reported, Bublé was Corden's most recent guest for the beloved segment "Carpool Karaoke" on The Late Late Show With James Corden. When Corden "picked up" the singer on his way to work, the segment immediately started off on a positive note with the host and Bublé jamming out to "Haven't Met You Yet." Corden immediately delved into how good he thinks the singer looks, comparing his physique to a photo of when the singer was a bit heavier. "When I was at that weight... I feel like when you're smaller, your penis looks bigger," Bublé pointed out. "Is that wrong? Because when you're bigger like that, it's like a buoy sitting in the middle of an ocean." LOL.

After Bublé sing-ordered an iced espresso from the car — and a worker actually brought one out to them (and then they left without paying) the pair sang "It's a Beautiful Day." This was followed by Bublé engaging in a scat battle with Corden's father, who plays the saxophone, along with a duet with Corden and Bublé singing "Love You Anymore." That's when the host brought up the heavy stuff.

"Now, you've had, by anybody's standards, you've had an incredibly tough couple of years," Corden said. "I think any person really, but particularly any parent of young children, essentially what I think you've gone through in the last few years is everybody's worst nightmare. Tell me about everything that happened with Noah."

"It's so hard to have to acknowledge it because it's so painful to talk about," a clearly emotional Bublé replied, according to Rolling Stone. "But obviously, we got the diagnosis, and that was it man, my whole life ended." Later on, he admitted to Corden:

It's weird man, I'm not OK. My wife, honestly, when this all started, I became the strength to somehow pull us and lift us and to be positive. And when they got [the cancer] out and the chemo was done and they said, 'We did it, it's good, he's ok,' I fell, I just fell. My wife picks me up now.

Back in 2016 — almost exactly two years ago _ Bublé and his wife Luisana Lopilato revealed that their 3-year-old son Noah was diagnosed with with liver cancer, according to The Sun. “We are devastated about the recent cancer diagnosis of our oldest son Noah who is currently undergoing treatment in the US," both Bublé and Lopilato shared on social media. "We have always been very vocal about the importance of family and the love we have for our children. Luisana and I have put our careers on hold in order to devote all our time and attention to helping Noah get well. At this difficult time, we ask only for your prayers and respect for our privacy. We have a long journey in front of us and hope that with the support of family, friends and fans around the world, we will win this battle, God willing.”

While Noah underwent cancer treatment, Bublé understandably took a break from his music career. The little boy's treatment ended in March 2017, according to People. And although there was a point he considered quitting music altogether, Bublé did end up returning to performing this past summer. Since then, the Canadian crooner and his wife have welcomed a third child — a baby girl named Vida.

Clearly, the past two years have been a whirlwind of ups and downs for Michael Bublé and his family. Although Noah seems to be doing great these days (thank heavens), the time between his diagnosis and the "all-clear" was obviously traumatic for Bublé and Lopilato. I appreciate that Bublé was strong enough to admit he's really not okay. And I truly hope the coming years for his family are filled with much more hope and significantly fewer doctor's visits. Thanks for opening up about your journey with us.