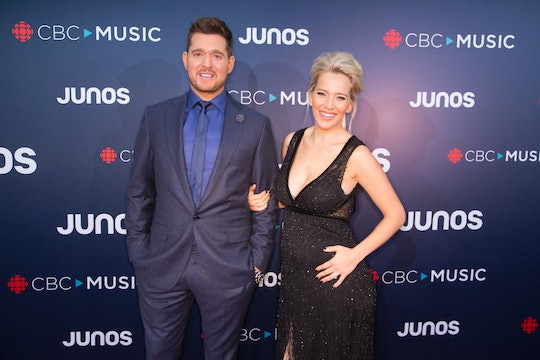 Michael Bublé is about to put his dreamy voice to very good use: lullabies. Argentine actress Luisana Lopilato and Michael Bublé just welcomed their third child, a baby girl. The married couple already has two sons: Noah, almost 5, and Elias, 2, so their new child is the family's first daughter.

Lopilato announced the happy news in an Instagram post on Thursday. She captioned a black-and-white photo of her baby's hand with a heartfelt message in Spanish. “How to explain that our heart explodes with love? That there’s not enough hours in a day to think about it," Lopilato wrote, as translated by People. "I thank God for making us this gift of life and happiness! Because looking in her eyes is looking at heaven itself! We love you to infinity and beyond. We waited for you not only to grow as a family … you gave us light, hope, you are and will be our souls’ life."

The couple has yet to share their baby girl's name or any other photos of her, but hopefully that information will come in time.

News that Bublé and Lopilato were expecting a third child first broke in early February, E! News reported at the time.

Bublé then confirmed the happy news in late March, when he hosted the Juno Awards in Canada. He told the audience, according to TODAY:

Then, in early July, Bublé revealed that he and Lopilato were expecting a girl. “I got my first little girl coming in three weeks, and I’ve actually never said that before in public. I’ve got a daughter coming," he said in an interview with Irish radio station Today FM, ET Canada reported. Bublé's rep also confirmed that the couple was expecting a girl to ET Canada that day.

In November 2016, Bublé and Lopilato's son, Noah, who was 3 at the time, was diagnosed with cancer, TIME reported. The couple addressed the news with a statement on Bublé's Facebook page at the time. The statement read:

We are devastated about the recent cancer diagnosis of our oldest son Noah who is currently undergoing treatment in the US. We have always been very vocal about the importance of family and the love we have for our children. Luisana and I have put our careers on hold in order to devote all our time and attention to helping Noah get well. At this difficult time, we ask only for your prayers and respect for our privacy. We have a long journey in front of us and hope that with the support of family, friends and fans around the world, we will win this battle, God willing.

In April 2017, Lopilato provided an update on Noah's condition, sharing that he was doing much better. “Thank God my son is well,” Lopilato told reporters in Spanish during a press conference in Argentina, as translated by E! News. “When things like those that happened to us occur, your take on life changes. Now I value life much more, the now and the today.”

And in an interview with the Standard earlier this month, Bublé confirmed that Noah's cancer was in his liver, and that his son is now "perfect."

As soon as Noah was diagnosed, his parents dropped everything to care for their son — Bublé took two years off from his music career, the Standard reported. Michael Bublé and Luisana Lopilato's top priority is clearly their children, and it will be exciting to hear updates on their new daughter.