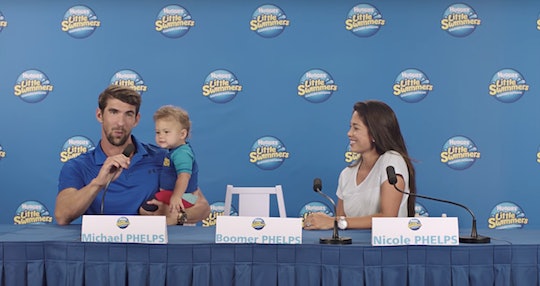 Michael Phelps Is Already Training For 2032, Sort Of

Summer is upon us, which means that everyone is ready to hit the pool or the beach. Even babies who aren't potty trained. Which is exactly why Michael Phelps and Huggies Little Swimmers have teamed up to start training this season. In an adorable new campaign, the Olympic winner staged a press conference with his wife Nicole and son Boomer to announce that he's ready to start training this summer for 2032. No, not Phelps, since he'd probably be aged out by then. But baby Boomer? That guy is ready to swim. Phelps announced Thursday morning that he's ready to get Boomer in the shallow end as soon as possible. He said in the faux-press conference:

I’m not teaching Boomer to master the butterfly just yet, but #Trainingfor2032 includes safe water play that helps build comfort and confidence in the water. I’m partnering with Huggies Little Swimmers because I want all babies to be the best swimmers they can be.

He added, “Some of the best memories of my life have been in the water —and none more special than the days I spend swimming with Boomer."

Although the press conference is pretty hilarious (Boomer manages to mangle a mic in under 30 seconds at the table), getting an infant or toddler in the water early is actually serious business.

According to the Centers for Disease Control and Prevention, there are just under 4,000 unintentional child drownings a year. But that doesn't mean that parents should keep their children away from water. If anything, it's evidence of just how important it is to teach safe water practices to young children and get kids accustomed to being the water in order to prevent tragic accidents later on.

Sure, Phelps' campaign with Huggies is mainly about advertising the ease of the brand's water-friendly diapers (which make changing babies easier with carefully places flaps), but it's also about making sure parents and caregivers feel comfortable with their children at pools and on beaches year round.

Phelps has been dedicating a lot of time to raising awareness for water children's water safety. He told People that he enrolled Boomer in infant water classes at 6 months old. "Anytime you can get them in the water for water safety, the earlier the better," he said. When they're still infants, getting in the water is more about trusting the water than doing laps or playing water polo.

Getting children accustomed to being in and near water is important. Enrolling children in "mommy (or whoever) and me" lessons as earlier as you feel comfortable is a good start. When children are very young, experts also recommend noting the water temperature, since tiny baby bodies can't regulate their internal temperature like adults, so if the water is cold for you, it's fah-reezing for your infant. (Those tears might be discomfort and not fear at first.)

Like anything else, introducing a child to water is a choice that's best left to the parents' discretion. But Phelps and Huggies are definitely trying to get the message out there that it's always the right time for swim time. As an added bonus, playing in the water wears your tiny human out before a nap. That's worth the hassle of swim lessons any time of year.