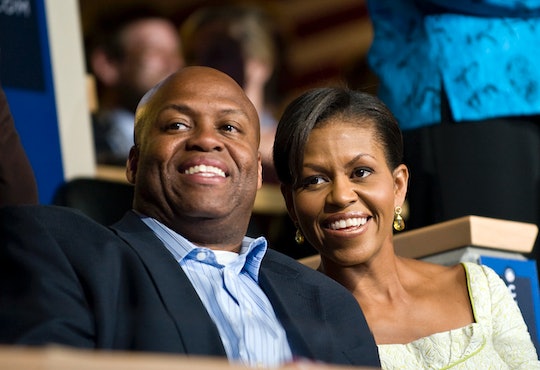 Once upon a time, former first lady Michelle Obama "got in so much trouble" with her older brother when they hatched a master plan to destroy their parents' cigarettes. In an exclusive clip from the newest episode of The Michelle Obama Podcast shared with Romper, listeners are treated to Michelle Obama and her brother Craig Robinson detailing a hilarious childhood story about how they went to great lengths to get their parents to quit smoking.

For Wednesday's episode of The Michelle Obama Podcast, the Becoming author sat down with her older brother to discuss elements of their childhood, revealing that they really did not love that their parents, Marian and Fraser Robinson, were both smokers. So, according to Robinson, his younger sister came up with a "great idea." "We can't get mom and dad to quit smoking," Robinson recalled Obama said at the time. "Let's break all their cigarettes!"

Obama shared that the two kids had already tried their hand at a few different ideas to get their parents to quit smoking, including taking "the tips of the cigarettes and dipped them in hot sauce" and then "dipped them in lemon juice," thinking that would be the way to stop their parents' habit for good.

While laughing, Obama recalled thinking their parents would say "oooh, cigarette butts are hot, you know maybe I should cut this out, you know."

Their dad, however, apparently didn't have much of an issue with his soggy, spicy cigs. "I remember, distinctly, dad putting one in his mouth, and going, there's something wrong with these filters," Robinson recalled.

So the two upped their game from moistening to full out destroying.

Obama and her brother took two entire cartons of cigarettes and crushed them into tiny pieces, as they remember it, and felt pretty good about it until their mom came home.

"The really scary but funny thing about the whole thing was when mom, when they got home, and they were looking for their cigarettes, and we were sitting there trying to look all innocent," Robinson explained. "We're sitting there, in front of the TV, looking like, mmm, right," Obama added.

When their mom opened the trash can and found the ripped up cigarettes, that was when, according to Obama, the pair realized they "really didn't think this through."

"We got in so much trouble," the mother of two admitted.

Both Obama and her brother have praised their mother for the way she raised them in the past, broken cigarettes notwithstanding. In a Mother's Day Instagram post, Obama wrote that her mom "always gave us the space to ask questions and share our ideas" when she and Robinson were growing up. "And she always took us seriously, carefully considering what we had to say and responding with thoughtful questions, and plenty of encouragement," Obama added in her post.

For his part, Robinson credited his mom in Obama's Netflix special Becoming for fostering their curiosity, saying she "always answered the questions that we had."

You can listen to this cigarette-crushing story in full as well as the entire episode of The Michelle Obama Podcast on Spotify.