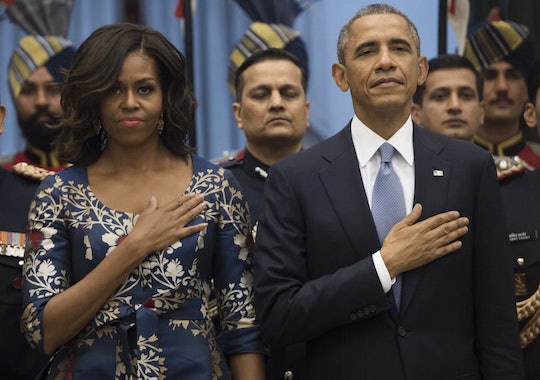 For his final State of The Union, President Barack Obama has promised an unorthodox address on Tuesday. He's not the only one in the family using the platform of a nationally-televised event to send a message to the American people. First Lady, Michelle Obama's SOTU guest seat will be left empty to honor the victims of gun violence, according to USA Today.

The Obamas wanted to leave the seat empty to honor victims because, as a White House official said, victims "need the rest of us to speak for them. To tell their stories. To honor their memory. To support the Americans whose lives have been forever changed by the terrible ripple effect of gun violence — survivors who've had to learn to live with a disability, or without the love of their life," according to the Huffington Post.

USA Today reported that President Reagan began the tradition of inviting a guest to sit with the first lady in 1982, when he asked Lenny Skutnik, a hero of the Air Florida Flight 90 crash to sit with former First Lady Nancy Reagan. Since then, presidents began inviting guests to sit next to the first lady to spotlight themes that arise in the president's SOTU speech.

In the past, Michelle Obama used the empty seat as a symbol of those who have died from gun violence. In June, she gave the commencement speech at King College Prep High School, a few blocks from the neighborhood she grew up in. The address was touching for another reason, however. Hadiya Pendleton, a student of King College Prep, who, according to The Huffington Post, had performed at an inaugural event in 2013, was hit by a stray bullet and killed just two weeks earlier. The first lady honored Pendleton in her commencement speech.

"I know that many of you are thinking about Hadiya right now and feeling the hole that she’s left in your hearts," Obama said, according to the video. In the audience sat an empty seat. It was draped in purple, the teen’s favorite color, and crowned with fresh flowers. Since her address in June, the nation has been shaken by a series of senseless gun deaths. Yet, Congress and the National Rifle Assocation are fighting proposed gun reform. So, the nation is divided. Viewers can expect the president to speak with impassioned words to end gun violence when he delivers the final SOTU address on Tuesday.