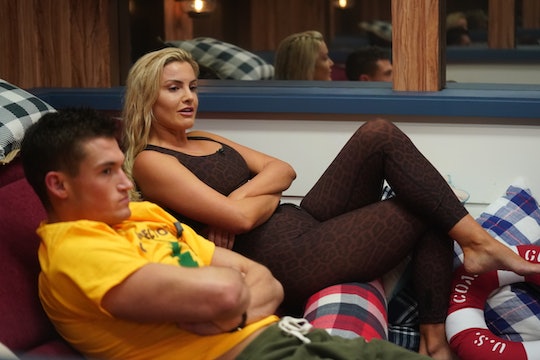 Michie & Kathryn's Showmance On 'Big Brother' Is Officially Over

As fast as Kathryn and Michie began their showmance this season on Big Brother, it’s over. They were the first established showmance of the season, as much as they claimed to not be in one or want to be in one, but Kathryn seemed like she was down to be his ride or die for the season. So when Michie broke up with Kathryn on Big Brother Sunday night, it was a shock. They could have used each other as allies, but instead, Michie fed some lines to her about needing to focus on himself and worry about his own game.

Kathryn could have been devastated and scorned, especially when Michie seemed to want to shack up with Holly and didn't really hide it. In reality, Kathryn just seemed to be surprised that Michie had broken things off so soon and suddenly. She didn't mourn over the breakup or ask him to take her back and for that, fans stan her as a strong Big Brother contestant this season.

To be honest, I did think the scene between Michie and Kathryn was a little sad, if only because it seemed to come out of left field for Kathryn. Michie began by telling her that what he was about to say had nothing to do with her and she actually asked him with a worried expression what she did wrong. Spoiler alert — she did absolutely nothing wrong and it looked like Michie just wanted to play a different game that didn't include such a public showmance. Whatever his true reasons were for breaking things off with Kathryn, however, she took it far better than I would have and fans love her even more now.

If I had to guess, I would say that one of Michie’s primary reasons for breaking up with Kathryn was his attraction to Holly. It's understandable that a houseguest would be attracted to more than one other player, so I’m not knocking Michie for that. It was just unfortunate that Kathryn had to be a casualty in Michie’s quest to see what else is out there. Although I wouldn't play the field too much if I was him since the "field" consists of a handful of women who are all living in the same house with him for the foreseeable future.

During Sunday’s episode of Big Brother, Michie said in the Diary Room that "Kat is a burden" and that she "doesn’t bring many positive things" to his future in the house. On the flip side, he said that Holly does, so that should tell fans where Michie’s feelings are with Kathryn, despite getting close to her for the first few weeks after they entered the Big Brother house.

Michie tried to tell Kathryn that being a showmance hurt their individual games. "Everything I did the past few weeks, [I did] out of my heart," he told her. "But I have to think with my brain in this game." Kathryn pointed out that there weren't any targets on either of their backs, but Michie stuck with his plan to nip their showmance in the bud.

He told her that he wants to focus on himself, which is understandable. The whole point of Big Brother is winning the money at the end of the season. The timing was just a little suspect, especially since Michie claimed that their showmance put targets on them but also told Holly that he would choose her over Kathryn.

To Kathryn’s credit, she took the breakup better than fans could have hoped. She seemed to be upset and hurt to an extent, but she also seems like the type of person who will bounce back easily and for that, you kind of have to love her as a player and as a person.

Regardless of how close Michie and Kathryn got before he broke things off, it's hard not to admire her for bouncing right back after she had that uncomfortable talk with him. Now, she can hopefully focus on her own game a little more. And if that means coming for Michie the first chance she gets, then I can't say he won't have it coming.