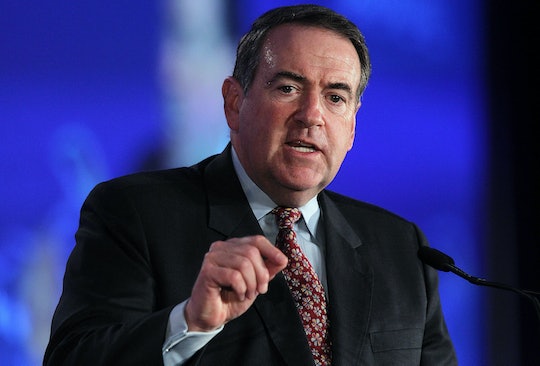 Earlier: As officials continue to manage an active scene in San Bernardino, today's mass shooting is already being politicized. Salon reports that Mike Huckabee implied that a ban on guns may have set the stage for the shooting at Inland Regional Center where current reports tell of at least 14 people dead, and 17 more injured. At 3:34 p.m. EST, Huckabee tweeted, "Praying for those impacted by the shooting in California today." He followed that sentiment with comments to reporters with him in Iowa. The candidate started by talking about the lack of available information, saying it's "premature to draw any conclusion" about the gunmen's identity or motivation. It's what he said next that is causing concern. CBS journalist Alan He shared Huckabee's controversial comments on Twitter:

So a tragedy, it's always a tragedy when somebody engages in some mass murder. I think it's a reminder to us in most every case that we've had in this country, two things have been a common denominators [sic], one a mentally unstable person. Two a gun free zone. And those seem to be the common denominators. I don't know if that's the case in San Bernardino but if it turns out to be it'll be one more horrible tragedy that we'll have to grieve through as a country.

Though Huckabee does not directly correlate lack of guns to violence in the case of San Bernardino, he does imply that the mass shooting may have been a preventable tragedy if guns were permitted inside the facility. Research indicates that this is a fallacious assumption. Boston Magazine reports that one Harvard study in 2007 found that tighter gun laws correlate to higher murder rates. Continuing to perpetuate the idea — especially in the midst of tragedy — can be deeply harmful to advancing the national conversation on eliminating violence.