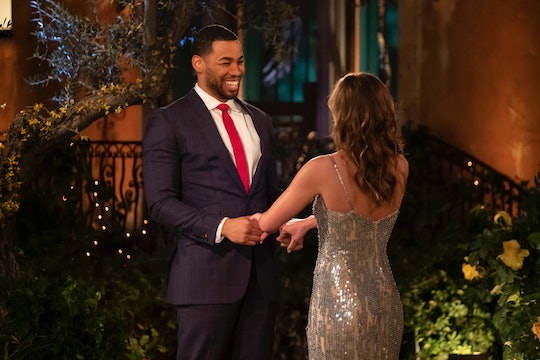 Hannah's first group date from tonight's episode of The Bachelorette was unique and funny and helped Hannah to see the guys in another light. But what she probably didn't expect was when Mike opened up about a miscarriage on The Bachelorette and got real in a major way. It might have brought them closer together, but it was clearly and understandably a difficult thing for him to tell her.

Mike explained to Hannah that during his last relationship, his partner had a miscarriage during her second trimester. Understandably, the pregnancy and labor simulator group date was a bit of a trigger for him, but the fact that he was able to open up to Hannah showed how strong he is despite going through such a terrible loss.

Mike's loss on The Bachelorette is a good reminder to fans that these contestants are real men who have gone through real issues outside of the show. It's easy to get wrapped up in the narrative of the season and only see these men as contestants fighting for roses and time with Hannah. Mike's story about the miscarriage his former partner suffered showed that some things are bigger than The Bachelorette and it helped to show a vulnerable side of him that Hannah might not have seen if he hadn't opened up to her.

Not only did Mike tell Hannah about the miscarriage, but he also revealed that he still has regret over not being there for his ex enough during and after the loss. Experiencing a loss of that magnitude can have long lasting effects, so it's totally understandable that Mike still thinks about the loss of his unborn child and has regrets related to that loss. He did say that going through the experience and coming out of it taught him how to be a better man and that his faith helped him get through the difficult time. Hannah seemed to appreciate the way he continued to open up to her and even though Mike didn't tell her the story to make himself stand out in any way, it seemed to bring them closer together.

Opening up about serious real life issues is nothing new in The Bachelor franchise. Last season on The Bachelor, Caelynn opened up about her sexual assault when she was in college. It was a difficult conversation for her to have with then-Bachelor Colton, but it helped her grow closer to him on a deeper level. It also expanded on the fact that these contestants are more than faces meant to give fans attractive Bachelor fantasy brackets for the season.

Mike didn't tell Hannah what happened with his ex after the miscarriage or if there had already been trouble between them, which might have led to him not being there more during the miscarriage. He did, however, say that he felt brave for opening up to Hannah and he seemed relieved that he did.

Between all of the light-hearted dates and international travel, Bachelorette contestants only have so much time to be able to get closer to the Bachelorette herself on a deeper and more important level. They already have less than three months to meet, stand out from two dozen other contestants, and fall in love. It can be a tough process. If they feel comfortable enough to open up about serious real life issues, then it can be the difference between being another future Bachelor in Paradise contestant and being a solid frontrunner.

Hopefully Mike and Hannah can get a little closer after he opened up to her. A miscarriage, however far along, is a devastating loss and while Mike seems stronger for having gone through the loss himself, it still likely took a lot for him to open up to Hannah about it.