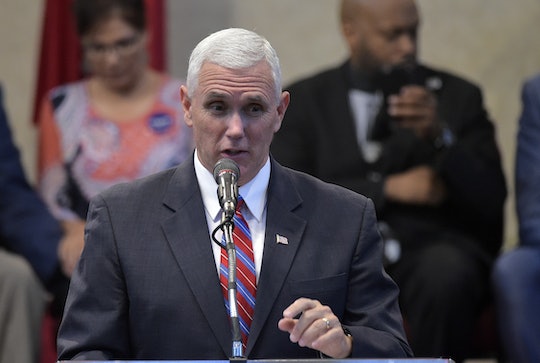 Donald Trump isn't the only one who's flip-flopped on his opinion of working mothers. Although his running mate, Mike Pence, said working moms stunt kid's emotional growth in a 1997 letter to The Indianapolis Star's editor, he now claims he's changed his mind. "For years, we have gotten the message from the mouthpieces of the popular culture that you can have it all, career, kids and a two-car garage," he wrote in 1997. "Sure, you can have it all, but your day-care kids get the short end of the emotional stick." And in case that coded "having it all" phrase wasn't clear enough, Pence made his meaning abundantly clear when he specifically called out mothers twice, and never fathers. It's obvious which parent he wanted to stay at home.

But in September — after Donald "Putting a wife to work is a very dangerous thing" Trump unveiled his appallingly sexist maternity leave plan, thereby kind-sorta backing working mothers (barely) — Pence changed his tune, telling host John Dickerson, "We’ve all had changing attitudes about this. As you grow up, John, you learn a little bit as you go along the way." Let's hope so. But even if Pence truly has learned his lesson on that particular issue, he's still no friend to women and children, as evidenced by all these other times that he played the real-life version of an '80s movie villain intent on shutting down the community center in order to open a nuclear power plant: