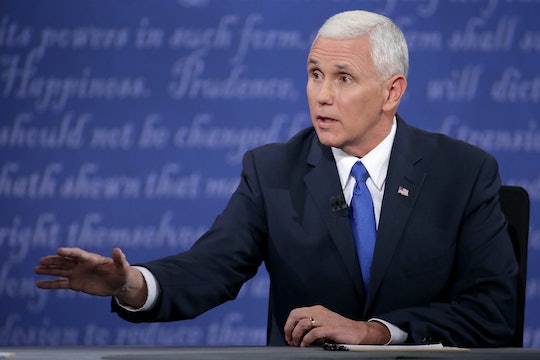 The first and only vice presidential debate between Republican vice presidential hopeful Indiana Gov. Mike Pence and Democratic vice presidential hopeful Virginia Sen. Tim Kaine came to an end Tuesday night, but not before the two potential vice presidents had the opportunity to talk about abortion. While championing himself as a protector of the "sanctity of life," Pence prided himself, and his home state of Indiana, in pushing adoption as the only response to an unwanted pregnancy. As a mother and a woman who has had an abortion, Mike Pence's "just adopt" comment proves he doesn't care about women, that he doesn't value women, that he doesn't trust women, and perhaps, most importantly, that doesn't understand pregnancy, labor, delivery, postpartum life, or adoption at all.

Adoption is always the "go-to" choice for anti-choice advocates, who would rather see a woman go through 40 (or more) weeks of pregnancy, not to mention hours of grueling labor and delivery, only to hand her baby over to someone if — and that's a big if — that baby has a person or family who wants to adopt it. According to the most recent federal data, there are currently more than 400,000 children in the the foster care system in the United States. Those children range in age from infants to 21 years old. Each year, approximately 200,000 youth will "age out" of the foster care system, either when they turn 18, 21, or when they graduate high school. There's a great need for children to be adopted, yes; a need that goes unfulfilled year after year. But it's a need that a woman with an unwanted pregnancy doesn't need to fill for someone else. If a family is looking to adopt a child, they need not look very far and they certainly don't have to try and force a woman to experience a pregnancy she doesn't want.

Of course, there's also the undeniable hypocrisy of having someone champion adoption while simultaneously pushing to keep same-sex couples from adopting. Not only has Pence been quoted claiming that keeping gays from marrying isn't discrimination, but that doing so is just an enforcement of "God's idea"; he's also served on the board of the of the Indiana Family Institute, a conservative advocacy group and an affiliate of the infamous Focus on the Family. The board worked to not only attempt to ban marriage equality in the state of Indiana, but to completely ban same-sex couples from adopting any of the 9,294 children currently in the Indiana state foster care system.

No one — absolutely no one — should be forced to put their body through something so taxing and potentially harmful and even life-threatening as a pregnancy they do not wholeheartedly want. No one should have their humanity whittled down to that of a human incubator, all for the sake of someone else's religious affiliations.

It would seem that Pence is a champion of adoption for all, unless "all" is a gay couple.

During a pregnancy I chose for myself — a pregnancy I wanted and a pregnancy I was ready and willing to experience — I suffered from a blood infection; was hospitalized numerous times and for significant and serious complications; underwent intense and invasive procedures, including having a needle inserted into my stomach; lost a twin 19 weeks into my pregnancy and was forced to carry the deceased twin until it was time to give birth; was nauseous everyday of my pregnancy; was afraid and unsure; endured endless constipation; was responsible for a massive amount of medical bills; and last but certainly not least, was subjected to over 24 hours of active labor, complete with three hours of pushing. No one — absolutely no one — should be forced to put their body through something so taxing and potentially harmful and even life-threatening as a pregnancy they do not wholeheartedly want. No one should have their humanity whittled down to that of a human incubator, all for the sake of someone else's religious affiliations.

It's easy, as a cisgender man who cannot physically experience pregnancy for himself, to tote adoption as a viable alternative to abortion. It's easy to talk about the "sanctity of life" while simultaneously discriminating against the lives of people — gay, lesbian, transgender, women with unwanted pregnancies — whose experiences do not mirror your own. Whether it's from the comfort of a chair on a national vice presidential debate stage, or from the Governor's chair of Indiana, Mike Pence's words, actions, and policies have proved time and time again that not only does he not understand women; he doesn't care about us, either.

More Like This
Reddit Had Tons Of Advice For Mom Whose Husband Finds Parenting “Painful”
10 Great Podcasts That Will Keep Your Kids Entertained On Your Next Family Road Trip
Sally Field Is The Ultimate Cool Mom Who Once Tried To Set Her Son Up With An Olympian
Marie Kondo Gives Up Tidying Post-Kids, Sparking Joy For Moms Everywhere
What Parents Are Talking About — Delivered Straight To Your Inbox