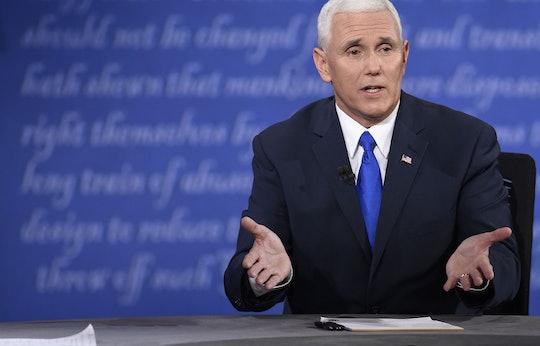 During the first and only vice presidential debate of 2016, Indiana Gov. Mike Pence and Virginia Sen. Tim Kaine took the stage to discuss, and essentially defend, their respective presidential nominees and the important issues their campaigns plan to address in the hopes of currying favor with potential and would-be voters come November. But while the debate was flooded with information, Pence's record on women's rights barely came up at the vice presidential debate — which is an utter failure, as over half of voters are women, an estimated 53 percent. So, not only are the majority of voters or potential voters in the dark after the vice presidential debate, they’ve also been left with a lingering message ringing in their ears, one that whispers, "You don't matter."

While Twitter was alive with dad jokes, comments on Kaine’s eyebrows, and the undeniable fact that Pence looks like he’s constantly staring — or, rather, squinting — at the sun, Twitter users also noticed that not once in the 90-minute debate were either vice presidential candidates asked about women’s rights, reproductive rights, access to abortion, or the gender pay gap. The issue of religion and abortion came up at the conclusion of the debate, but it came off as a last-ditch effort to appeal to women voters who had tuned in to hear how each candidate plans to handle reproductive rights. Pence’s political track record on reproductive rights and women’s health care is not only disturbing, it’s something that should have been highlighted on a national stage at great length, as Donald Trump has claimed Pence will be the "most powerful vice president in the history of the United States." While Trump is busy “making America great again,” he'll task Pence with both foreign and domestic policy. And for women in America, that's a very dangerous possibility.

In a Donald Trump/Mike Pence presidency, fetuses deserve burials, but a woman doesn't deserve the right to decide what she does her own body.

Not touching the subject of women's rights, of course, works to Pence's favor. In 2011, Pence authored the first bill to strip all federal funding from Planned Parenthood, for example. Before the vice presidential debate, at a speaking engagement at a Town Hall Meeting in Grand Rapids, Pence predicted that Roe v. Wade — the landmark Supreme Court ruling that legalized abortion in the Untied States — would be overturned if Donald Trump was elected president. During the meeting Pence also went on to say,

We’ll see Roe vs. Wade consigned to the ash heap of history where it belongs.

While such a statement likely sends chills down the spines of every woman who has had an abortion — an estimated 1 in 3 women in the country — as well as every man and woman who fight tirelessly for reproductive rights in this country, it's also not a surprise. Pence has championed himself as the "Evangelical pro-life champion," and has made no apologies for leading the fight to ban abortions from coast to coast. In March of 2013, Pence signed House Bill 1137 into law, essentially forcing women to endure potentially high-risk pregnancies by taking away the ability for a woman to choose (or a doctor to perform) abortion if the fetus is diagnosed with a disability. The bill also required burial and cremation services for aborted fetuses. In a Donald Trump/Mike Pence presidency, fetuses deserve burials, but a woman doesn't deserve the right to decide what she does her own body.

Abortion was mentioned towards the end of the debate, but only about five minutes before it ended. Both vice presidential nominees were asked how they grapple with their respective religions, and when Pence had time to respond, he replied with his care for the "sanctity of life." He then quoted scripture, saying, "God says, 'Before you were formed in the womb, I knew you.'" He then championed himself and the policies he passed in his state of Indiana, proud of the fact that they have "expanded alternatives for healthcare counseling (non-abortion healthcare counseling)," noting how "happy" he is that "we're on the way to becoming the most pro-adoption state, because if you're pro-life, you have to be pro-adoption."

What Pence failed to mention, however, was that his efforts to "expand alternatives for healthcare counseling" also led to Pence declaring a state of emergency in Indiana, after a growing number of HIV cases.

Kaine responded with a simple, yet incredibly important question, one that's been on the minds of women around America ever since Trump announced him as his running mate in July:

Why doesn't Donald Trump trust women to make their own decisions?