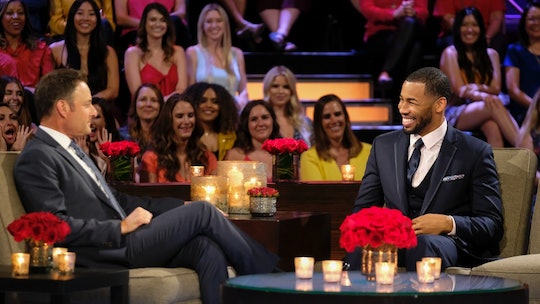 Mike Is Already Living 'The Bachelor' Life On 'Bachelor In Paradise'

There are some Bachelor in Paradise contestants you expect to see, like Demi, who was the perfect not-so-mean-girl from Colton's season of The Bachelor. But there are others you hope against all odds will show up to get their next change at love, like Mike, who almost made it to the final four on Hannah's season of The Bachelorette. So Mike's entrance on Bachelor in Paradise was the one a lot of fans had been looking forward to in the weeks leading up to the Season 6 premiere.

On The Bachelorette, Mike opened up to Hannah about a miscarriage he went through with an ex of his and later, he seemed legitimately heartbroken when Hannah realized she didn't have strong enough feelings for him to keep him around. Mike was one of the more open contestants and he became a fast fan favorite as a voice of reason among all of the drama. Naturally, some fans hoped he would show up on Bachelor in Paradise since he didn't make it to hometown dates on The Bachelorette.

Almost as soon as Mike arrived in Paradise, the women flocked to him. It helps that he came across as genuine on The Bachelorette, which can be hard to do in a sea of Instagram influencers and drama starters. He is enough to make any of the other guys sweat, but Cam in particular since Mike is the guy who told Hannah on The Bachelorette that Cam had tried to manipulate her for sympathy and a pity rose. So when Mike set his sights on Caelynn, who Cam is already sweet on himself, it made things worse for Cam yet again.

But Caelynn was among the handful of women who were happy to see Mike when he walked down the steps to greet his fellow Bachelor in Paradise Season 6 contestants. Not only were fans excited to see Mike make his entrance, but it seemed like the majority of the cast was just as excited to see him.

Chris Harrison might have hinted to E! News that producers are going to look at how the men on Bachelor in Paradise this season are perceived by fans to see if there are any potential Bachelor leads among them.

While Mike's exit on The Bachelorette seemed to set him up as a frontrunner in the bid for The Bachelor, his time on Bachelor in Paradise could be everything producers need to determine that he should be the next male lead in the franchise.

When he made his Bachelor in Paradise debut Monday night, he said, "I feel that I am completely ready and excited for what's to come" and added that he doesn't give up on anything he does. Those are Bachelor lines if I've ever heard them.

If Mike isn't lucky enough to find lasting love on Bachelor in Paradise this season, then just going on the show could still be the best thing for his future in the franchise.