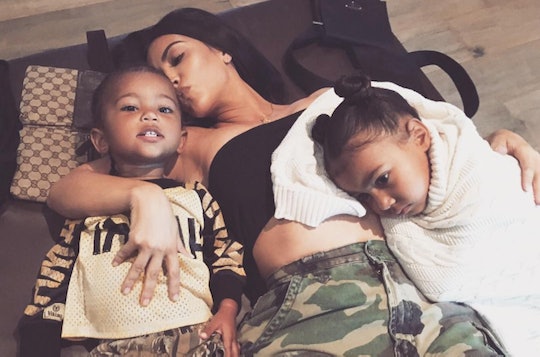 You see them all over the internet: a Millennial mom holding up her perfect baby, a 'gram perfected using some of the best lighting and photo-filter programs known to man. I am a 20-something mother of a toddler who has grown up in the thick of the Instagram era (#mama), and that brings with it a kind of impossible standard of hipness. Worse, Millennials are often labeled as lazy and entitled. While I am thankful for all of the technological advances that make having a baby in 2017 a lot easier (thank you, Google!), I'm here to say that being a Millennial mom is not all Frozen singalongs, Fingerlings, and avocado toast.

When I gave birth to my son, I went into the experience ready to absorb the advice of my elders. I was not ignorant of the fact that older moms of past generations knew more about motherhood than I did. I respected people's opinions and listened to completely unsolicited advice about sleep schedules, bottles, and whether breast was best with studious patience. Quite against the cliche, my world didn't revolve around styling my baby for elaborate Instagram photo shoots, dressing in matching mom-and-me plaid (although: I wish!), or brewing kombucha in my kitchen. Like every mom before me, I was simply trying to get by and do the best I could for my son.

Sure, we like to post pictures of our kids on every social media channel out there, and yes, maybe we overuse the Gingham filter, but we are also spending time worrying about their health, their social awareness, and their ability to be respectable adults.

But during that first year of new motherhood, it became more and more clear to me that while I had a great deal of respect for older moms, I was not afforded that same luxury. As a Millennial, you are often branded a lazy human being who expects things to just be handed to you without hard work and dedication. When you throw being a mom into the mix, the judgment that comes with this stereotype is even more harsh. As I navigated my way through motherhood, I found that people questioned my ability to be a parent in the first place, solely based on my age and generation.

As a mom, my philosophy is that if my child's behavior is not hurting you and he isn't hurting anyone, it is generally OK with me. This means that sometimes, I let my son sit on the couch to eat his Cheerios instead of at his little table. Occasionally, I'll slip him a Tootsie Roll in the morning. If I am feeling really wild, I let him fall asleep on my lap instead of in his bed. I pride myself on being a chill mom, but I still know when to reprimand my son if needed. I think it's possible for both of these things to be true at the same time.

But because I am a Millennial mom, my ex-mother-in-law takes every opportunity to point out that I am a lazy mom who allows my child to do whatever he likes. She thinks I don’t have enough rules or structure, and that my son needs to be reprimanded more often than he is. Like many parents from older generations, she believes that I don’t know what I am doing. I'm not allowed to have my own parenting style.

The truth is, Millennial moms are changing the way we parent and look at motherhood altogether. We are blazing the trail to raise healthier children, with 71% of millennial moms prioritizing healthy-eating habits, according to Women's Marketing. Sure, we like to post pictures of our kids on every social media channel out there, and yes, maybe we overuse the Gingham filter, but we are also spending time worrying about their health, their social awareness, and their ability to be respectable adults.

Being a Millennial mom sucks because I have to defend almost every parenting decision and choice that I make, simply by virtue of the fact that I am a young mom in 2017. There is plenty of stigma and guilt to go around in the world of motherhood, and Millennial moms should be given more credit for their decisions, rather than being questioned and berated. Our kids are fine. So stop worrying about them — and stop judging us.

I see a lot of hand-wringing around the perceived narcissism in Millennials, stemming from the fact we "all got trophies" as children. I'm here to call b.s. on that stereotype. As a mom and a Millennial, the only trophy I care about is my kid.