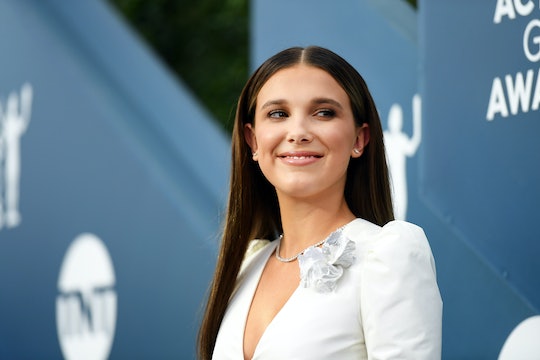 Each year, the red carpet at the Screen Actors Guild (SAG) Awards brings viewers glamorous gowns and dapper suits. But mixed in amongst the latest fashion trends are always, without fail, a few fashion controversies. This year, it was Millie Bobby Brown's SAG Awards outfit that caused quite a stir among fans who felt she was dressed inappropriately for her age.

Brown stepped out at Sunday's SAG Awards in an all-white Louis Vuitton ensemble that featured a belted, long-sleeved jacket over a tailored, slim-fitting dress pant. As Entertainment Tonight reported, an oversized floral brooch and a simple, but stunning diamond necklace with matching stud earrings from Cartier finished the look.

While many, including the fashion magazine Harper's Bazaar, found Brown's look to be reminiscent of '80s wedding glamour, others complained her outfit and makeup were too "old" for the teen. "She's too young for that much cleavage," one user said of 15-year-old Brown in the comments on an Instagram post from Nylon showcasing Brown's outfit.

Others agreed, adding that they thought the jacket's low neckline wasn't age appropriate. "My mom would never let me show cleavage like this at 15," one Instagram user wrote on Nylon's post. "I don't think this is really appropriate."

On Twitter, a number of SAG Awards viewers had similar reactions. "Fifteen going on 30," one user wrote of Brown's look. "Idk why she feels, or her team feels, that they need to age her. Experience childhood. Gosh."

"MillieBobbyBrown went from a baby eating waffles to looking like she got two kids and a mortgage," another Twitter user commented.

Despite the haters on social, Brown appeared quite proud of her outfit. She told reporters on the red carpet that her Louis Vuitton ensemble — which she later revealed included a sparkling strapless top — was "everything" she'd wanted for the night. I definitely wanted to go for a masculine but very feminine look," she said.

Later, in a red-carpet interview with ExtraTV, Brown explained that while her style is a collaboration between herself and her stylist, her family does have some input on what she wears. "My stylist, Thomas Carter Phillips, is a very talented man and I love him and we collaborate really well together," she told the entertainment news outlet. "My family have input, so it's definitely a collaboration."

This isn't the first time fans have claimed that Brown was dressed in fashions that aged her. Her outfit choice — a long-sleeved, loose-fitting black leather dress — at the Stranger Things 2 premiere in 2017 also caused some to comment that she looked like a middle-aged woman rather than a young teen.

More recently, Brown told Harper's Bazaar that it can be hard to tune out those who are critical of her fashion choices. "It's always difficult to dress for a red carpet event because a lot of people have opinions and unfortunately you say you won't listen to it, but you actually kind of have to," she told the magazine in November 2019. "For me, I sit there and think, I'm not going to listen to what they have to say, journalists or whoever wants to write badly about my inappropriate outfit."

Hopefully, the Stranger Things star hasn't woken up Monday to read how folks on social media are discussing her cleavage.