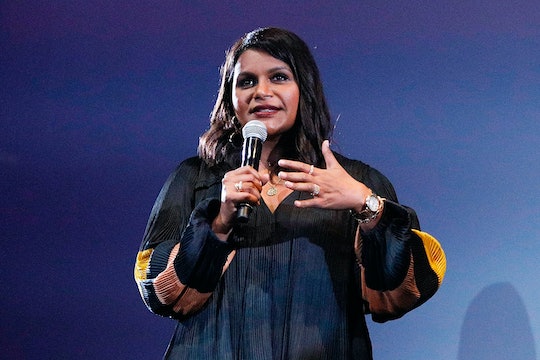 Mindy Kaling Says She Always Wanted To Be The 'Cool Parent' & Duh, She Is One

Parenting is hard, but being the fun parent is, arguably, even harder. Mindy Kaling says she always wanted to be the "cool parent," and it looks like she's nailing it. The Mindy Project star tweeted a photo of the epic playhouse she had built for daughter Katherine Kaling, telling fans she hoped it would inspire neighborhood kids to come play at her house.

On Friday, the 39-year-old posted the photo of the playhouse on Twitter, in which Mindy could be seen swinging away. The massive wooden structure featured a curvy slide, several clubhouses, two swings, a two-person swinging seesaw, and fun details like wooden hearts, stars, and birds in blue and red. Kaling, who appeared in the photo, looked to be enjoying it, but daughter Katherine wasn't pictured. Her absence from the photo is likely due to the fact that the comedic actress is careful not to show her face. Kaling didn't built the playhouse herself, but did shoutout the company that did, thanking them for making her "the cool parent with the cool backyard."

"All I've ever wanted for my kid is to have 'the fun house'. Remember that one friend that had the coolest backyard and everyone wanted to hang out there all the time? Well, now I'm the cool parent with the cool backyard," she tweeted. "Thanks @CedarTweets."

Kaling is definitely a cool mom, not a regular mom, though she's had to shift her expectations on some hopes she had for herself and her daughter; namely, the type of toys her child would play with. Speaking with HuffPost, Kaling said that when she was pregnant she hoped her daughter would play with "hipster wooden toys," but quickly found that she prefers brightly colored plastic playthings, just like every kid. All moms can relate. Parenting is basically one big expectations vs. reality meme.

"I tried to do that thing in the beginning where I only got her these, like, hipster wooden toys that are beautiful to the eye and don't make your house look like it's been overrun by children," the actress explained. "And she hates them, so I've had to give them all away. She only likes primary color, loud, beeping toys that are impossible to turn off."

Additionally, Kaling has the built-in luxury of having a cool job, and getting to bring her daughter along with her. I predict a lot of fun career days in Katherine's future. The first-time mom opened up about the perks of having a baby later in her career, telling PEOPLE that she's lucky to get to pick what jobs she takes, and bring Katherine on set with her when she has to. If only every working mom had that opportunity.

"I'm really lucky because I get to create my own job opportunities. Because I do that, I can fit my daughter into my job. It's a luxury most American women don't have," she told the magazine. "It's one of the nice things of having had my baby a little bit later in my career. I can be like, 'Hey, I want a little area that I can have my daughter play because I want to check up on her at work.' That is probably the biggest perk of my life: to involve my daughter so much in my career."

Cool is subjective, but it sure seems like Kaling is nailing this whole parenting thing. Fans have come to look forward to glimpses into her life as a mother, which currently includes several adorable moment in matching pajamas with her baby girl. The cool mom points are through the roof at this point.