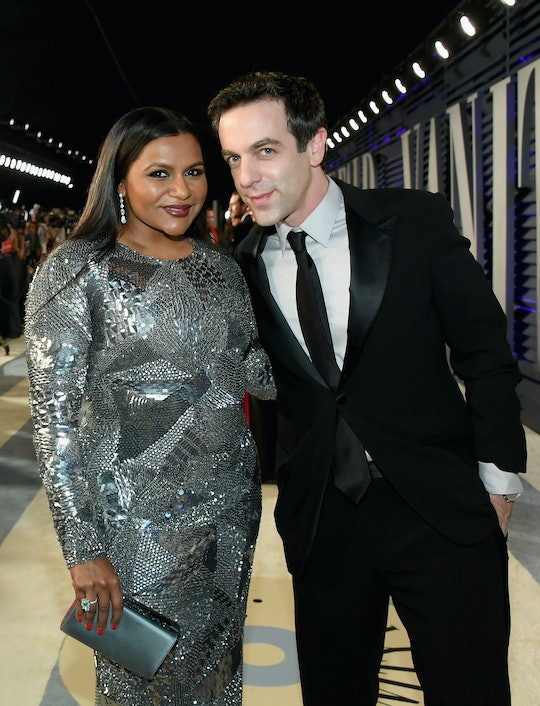 One of the best tools a single mom can have in her survival repertoire is a really great friend. The kind of friend who loves her kids, who is cool with hanging out with them even if they don't have kids themselves. Well, Mindy Kaling's most recent comments about B.J. Novak as a godfather to her children are proof that he is exactly that kind of helper his former co-star from The Office needs as a mom of two.

The author and actor recently announced on The Late Show With Stephen Colbert that she had secretly welcomed a baby boy named Spencer in September, making Kaling's 2-year-old daughter Katherine, who she adorably calls Kit, a big sister. Not only did Spencer's birth make Kaling a mother of two, but it also made her longtime best friend B.J. Novak a godfather of two, as the actor told Jenna Bush Hager during recent interview on Today. And, according to Kaling, Novak is up to the task.

As Kaling told Hager, Novak is especially connected to her daughter Kit. "You know, he said the funniest thing because he's so attached to my older child, my daughter," she said. "When I said, you know, B.J., if something happens to me, it's not like I have a husband, like you have to just take the kids. And he's like, 'Oh, my God, don't tempt me.'"

Novak, who does not have any children himself, appears to be making some plans of his own. "And he said the funniest thing. He was like, 'Can you sue for god paternity rights? Because he's the godfather because he just like loves her so much," Kaling said during the same Today interview.

Fans of the two best pals know that they were romantically linked while working together on The Office, dating on and off over the course of several years before becoming, as Kaling told Vulture in 2012, "real best friends." And in a May 2019 interview with Good Housekeeping, Kaling revealed that Novak was her daughter's godfather, explaining he had become "a real staple" in her household.

Kaling actually opened up about Novak's role as godfather to her two children during an interview with Colbert at the beginning of October, admitting that the concept of a godfather doesn't necessarily align with either one of their faith backgrounds. "He was at the mundan but nothing more than that," Kaling told Colbert, referring to the traditional Hindu ritual of shaving the first hair from a baby's head. "It’s hard because the concept of a godfather is a Christian thing. So he’s Jewish, my kids are Hindu. And so, maybe he was not the right person to pick, actually."

But now that Novak is so attached to her daughter, he has clearly proven he was an excellent pick for being her godfather. So long as he doesn't try to get those god paternity rights, that could be a bit of a problem.