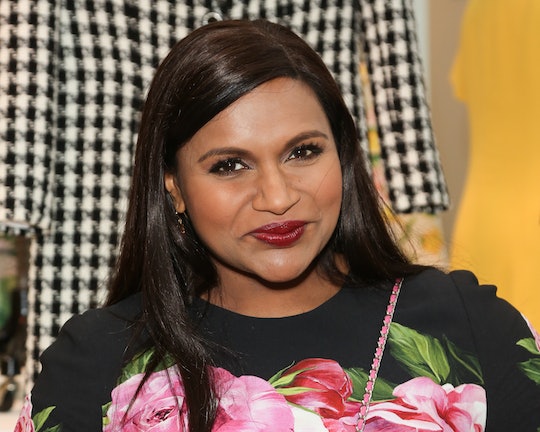 After keeping news of her pregnancy a total secret, Mindy Kaling revealed she gave birth to a baby boy, her second child, a month ago. As Kelly Kapoor would wisely say, "This day is bananas, B-A-N-A-N-A-S."

During a Thursday night virtual interview on The Late Show With Stephen Colbert where she talked about her new essay series on Amazon, Nothing Like I Imagined (Except Maybe Sometimes), Kaling casually dropped the news that she had given birth to a baby boy named Spencer back in September, making her a mom of two. Kaling gave birth to her daughter Katherine "Kit" Swati Kaling back in December 2017.

"I'm telling it for the first time now, it feels so strange," Kaling told Colbert. "But I gave birth to a baby boy on Sept. 3."

Kaling admitted that "this is news to a lot of people," and that's an understatement. During the pandemic, she has been keeping busy on social media, sharing exciting news about her career like her upcoming work as one of the writers for Legally Blonde 3 with her pal Reese Witherspoon. She has also been busy supporting Sen. Kamala Harris in her bid to become the first female vice president in the White House.

And yet. She managed to keep this huge secret through it all. Impressive.

There was one little person who was not that impressed with baby boy Spencer, as Kaling explained to Colbert: Her daughter Kit. "She was very ambivalent at first, I would say to be generous," Kaling said. "She was really worried about her toys getting taken." Fortunately, once Kaling brought home a baby rather than a toddler who could take her toys, Kit became "a huge fan" of her baby brother.

The new mom of two told Colbert that she kept her pregnancy under wraps because "there's so much heartbreak in the world" right now. But there was a moment when she thought her secret might be shared with the world. When Kaling was eight months pregnant, the Daily Mail took photos of her heading to the toy store to buy some things for baby Spencer. The news outlet didn't catch on, as she told Colbert, and Kaling thinks she knows why. "They were too nervous to claim I was pregnant," she said. "It was almost more insulting. They were like 'Oh yeah, Mindy Kaling just looks like this.'"

Now that she's a mom of two, Kaling said she has noticed one significant difference already: "Saying 'my son' feels very formal" while she feels that "saying 'my daughter' feels contemporary and of-the-moment."

One thing is for sure, her fans are going to be excited to get updates about little Spencer whether she refers to him as 'my son' or not. Especially now that we know he exists.