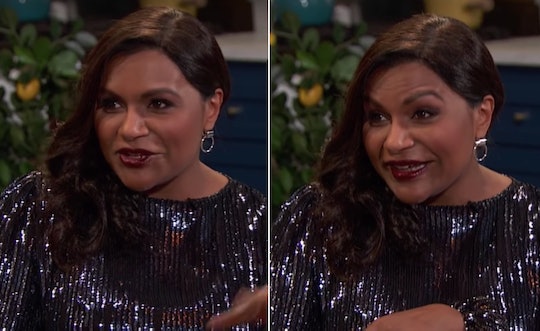 I'm not quite sure there's anyone who wouldn't love the opportunity to be friends with Oprah Winfrey, but during an appearance on the premiere episode of actress Busy Philipps' new show, Busy Tonight, Mindy Kaling admitted that she was so thrilled to be on the receiving end of the talk show legend's text messages that she went to some great lengths to respond. In fact, Mindy Kaling texted Oprah while she was in labor with her daughter, Katherine, according to Entertainment Tonight, and though that might seem a bit extreme, let's be honest, is there ever an appropriate time to ignore Oprah's messages?

Kaling struck up a friendship with Oprah when they were co-stars in A Wrinkle In Time, and since then, it sounds they've remained pretty close. Not only was it actually Oprah who unwittingly spilled the beans about Kaling's pregnancy back in 2017, according to People, she also sent Kaling the most "Oprah" baby gift ever. In February, Kaling told USA Today that "two men in a U-Haul truck" came to her house to deliver "a hand-carved bookcase ... that contained a hundred of the classic essential books in children's literature." And if that weren't already cool enough, Kaling said each book also happened to have the words "Katherine's Book Club" written on it.

In her sit-down chat with Phillips though, Kaling shared what may have been the secret to her great relationship with the greatest gift-giver of all time. Kaling admitted that though she ignored "a bunch of texts" while she was in labor with her daughter, she wasn't even sort of on the fence about responding to Oprah. As Kaling explained:

In response, Phillips quipped, "That is, by the way, the 100 percent correct response. You handled that perfectly," and I have to say I totally agree. But it certainly wasn't the last time Kaling said she felt eager to leave a good impression on her new friend.

Even though leaving the house with an infant is pretty much always nerve-wracking, Kaling explained to Ellen DeGeneres earlier this year that she'd once attempted to bring Katherine to Oprah's house for a screening of A Wrinkle In Time she'd organized for the cast. Although I already admire Kaling for even *considering* bringing her daughter to what she described as "the nicest home in America," it's even more remarkable when you consider that Katherine also happened to be going through a particularly fussy stage at the time.

Kaling's solution? She basically begged her daughter to get it together. As Kaling told DeGeneres:

The minute we went in, I was like, "Katherine, please. You have no idea how high the stakes are right now." And we walked in the door and her eyes went wide, and she stopped crying. Like, she knew she was in Oprah's house. And then she was just coyly smiling and being adorable for the next four hours.

In other words? Kaling got unbelievably lucky, and it couldn't have happened at a better time: though Kaling said she's "not, like, Gayle [King] close with Oprah," the two have certainly remained good friends. And from the sounds of it, friendship is something that is an incredibly important aspect of Kaling's life — particularly as a new mom.

In June, Kaling gave a speech at Dartmouth College in which she discussed the experience of becoming a single parent, and what she shared was pretty powerful. According to Entertainment Tonight, Kaling said:

After my daughter was born in December, I remember bringing her home, and being in my house with her for the first time and thinking, "Huh, according to movies and TV, this is traditionally the time when my mother and spouse are supposed to be here, sharing this experience with me." And I looked around and I had neither, and for a moment it was kind of scary, like, "Can I do this by myself?" But then that feeling went away because the reality is, I’m not doing it by myself. I’m surrounded by family and friends who love and support me.

Although, in reality, Oprah likely would have totally understood if Kaling temporarily ghosted her because she was, uh, delivering a child, hearing The Mindy Project star admit to responding while in labor is pretty hilarious. And yet, in what is certainly a testament to the world's adoration for Oprah, it also seems entirely understandable.