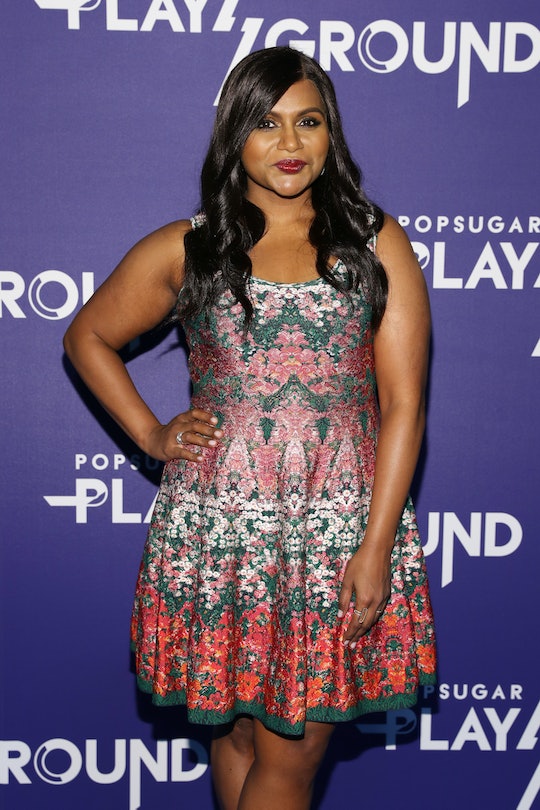 Can you believe Mindy Kaling has been a mom for an entire year? The funny actress gave birth to her first child — a daughter she named Katherine — more than a year ago, at this point. Although the Office alum still hasn't shared any identifying photos of her baby girl, she has divulged plenty of parenting stories and lessons along the way. (Which, for the record, were every bit as hilariously accurate as I imagined they would be.) In fact, Mindy Kaling's first year of motherhood was filled with so many relatable moments.

As People reported around this time last year, Kaling gave birth to a daughter named Katherine Swati Kaling on Dec. 15, 2017 in Los Angeles, according to the child's birth certificate. The baby girl's middle name, Swati, honors Kaling's mother, who died from pancreatic cancer in 2012, according to the publication. Although, judging by her Instagram feed, you'd never be able to tell — because unlike so many celebrities these days, Kaling didn't post any birth announcement whatsoever. After a few weeks, though, the Office alum eventually did acknowledge that she had given birth. On Jan. 20, she shared a photo of a seriously tripped-out baby stroller, writing, "First walk. Gold rims and wings. Thank you @itsjeremyscott@cybex_global#CYBEXbyJeremyScott ❤️."

By the time April rolled around, Kaling was opening up about the newborn days with her baby girl. During an interview with Today's Hoda Kotb, she shared how hard it can be to know if you're doing a decent job as a new mom. Kaling explained there was "zero feedback except for crying for the longest time," according to E! News. "Then you start wondering, 'Does she care about me? Know about me besides that I'm a food source for her?'" (I'm pretty sure the majority of new parents have all wondered this at some point during those first few weeks; I know I did.)

In June — while appearing on The Ellen DeGeneres Show — Kaling brought up another all-too-relatable moment for new moms: The monster that is breastfeeding hunger. "The hardest part is when I was really pregnant — when I came to see you last — I was just eating whatever I wanted," Kaling told the talkshow host. "Because when you're pregnant, you can just say it's like cravings. You're like, 'I needed to have 11 cupcakes because of my pregnancy cravings.' And everyone's like, 'No, she's about to have a kid. Let her eat whatever she wants.'" She continued:

But I haven't altered that, that much, since having the kid. So yeah. It's not normal to be not pregnant and have a birthday cake at Tuesday afternoon when it's not your birthday.

LOL. So this. I was ravenously hungry around the clock while breastfeeding my babies. It felt like all I did was eat and serve as a food source myself.

Yet another "same, girl" moment from Mindy Kaling came during an appearance on The Late Show with Stephen Colbert in March. There, she dished on how she was so not a baby person before becoming a mom. "It’s really profound and strange. I was not a kid person at all," she told the host, according to People. "I was the person, if you had a baby at a party, I would go up to them and shake their hand and be like, 'Hello.' So I didn’t know [or] understand how to be around babies." She continued:

I was on planes [and] when babies would cry, I would be mad at the families. Now I’m like, "Let them cry, let them do whatever they want. They can sit on me and poop if they want." Now I know more.

Although Kaling hasn't been interviewed recently about motherhood, as InStyle reported, her Instagram followers caught their very first glimpse of Katherine on Oct. 31. Alongside a photo of mother and daughter clad in their Halloween costumes — with Katherine's back turned to the camera, of course — Kaling wrote, "Happy Halloween from this bottle of mustard and her little lion ❤️🦁🎃." LOL. Themed costumes are so overrated anyway.

Less than a month later, Kaling shared a photo of her legs and her baby girl's legs with matching pink shoes. "Thankful for her. Happy Thanksgiving. 💖 💖," she wrote on Instagram.

Although fans haven't yet had a chance to hear Mindy Kaling's thoughts about motherhood now that she has a whole year of experience under her belt, if you ask me, she's been totally rocking it. Sure, she keeps the kid posts on social media to a minimum — and prefers to keep identifying photos of Katherine away from public eyes altogether. But you have to admit that she "makes up" for this desire for privacy with some relatable AF quotes about motherhood. Hopefully the hilarious parenting truth bombs keep coming in 2019!