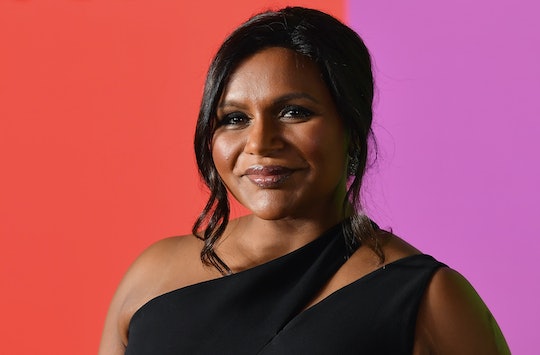 It's been entirely too long since the world was gifted some prime television content from the mastermind behind The Mindy Project, so I'm happy to report that Mindy Kaling is developing a show for NBC's new streaming platform, Peacock. The upcoming show, titled Expecting, will focus on a single woman who decides to become a mother and is set to premiere on the new streaming platform later this year.

Expecting will reportedly focus on a "fiercely independent but perpetually single" woman named Ellie, who always wanted a family, but never found anyone good enough to be a father, according to The Hollywood Reporter. But when Ellie turns 39, she approaches her gay best friend and co-worker to be her sperm donor, who surprisingly says "yes" and their lives are then turned "upside down as they try to turn their 'chosen family' into a biological family," the magazine reports.

Kaling, a single, fierce, working mom herself, welcomed her daughter, Katherine, in December 2017. This past June, she told Glamour having a daughter has motivated her to work harder. "She just has me. I know at some point I will have to do less, because it's not like there's a dad at home picking up some of the slack," she told the magazine. "I think that's another reason why I work so hard — because I know that when she gets a little bit older, I want to be able to take off more time to spend with her."

Expecting isn't the only show with a parenting or kid focus that's coming to Peacock. Jimmy Fallon is developing a talkshow for Peacock called The Kid's Tonight Show, a late night style talkshow with kids in charge. Parents will also be delighted to hear there will be sequel series to Dreamworks' Madagascar film series, Madagascar: A Little Wild on there, in addition to Trollstopia, a new series to come from the Trolls franchise.

Peacock will host over 7,500 hours of programming (including movies and classic shows) for free with Peacock Free, but new shows in development will only be available on Peacock Premium, which will cost $4.99 a month, according to CNN. While Comcast customers will be the first to access the new streaming service on April 15, according to The Hollywood Reporter, it'll be available to all on July 15 when the service launches nationwide. In the meantime, fans can only hope Kaling shares some inside scoop about her new show.