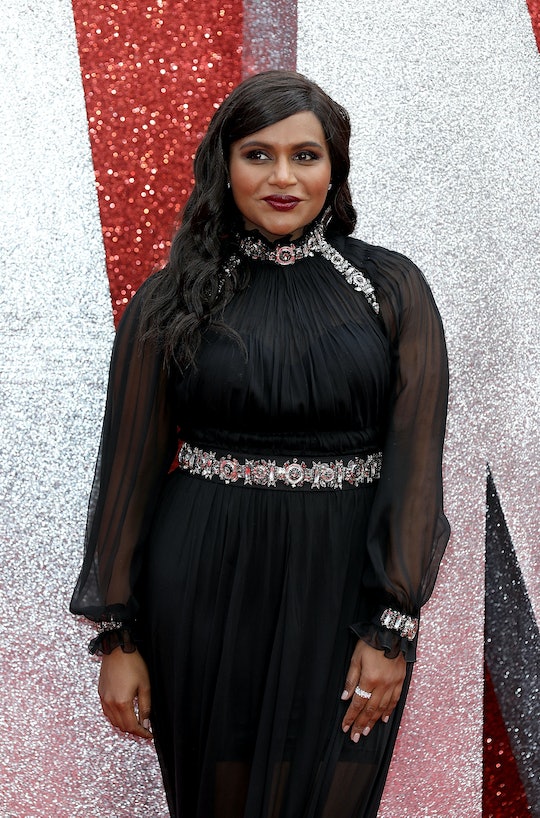 Mindy Kaling's Photo Of Herself & Katherine Wearing Matching PJs Is Everything

There's nothing quite like celebrating the holidays as a parent. Because essentially, you get to experience all of the magic of the season from a brand new perspective. It's like re-living your own childhood while also getting to see family traditions passed down to another generation. Even though your child might not have any idea what's going on during his first (and probably second) Christmas, it's still an exciting time for sure. And Mindy Kaling's photo of herself and baby Katherine rocking matching Christmas pajamas is seriously the cutest thing.

On Christmas Eve, the former Office star took to Instagram to share a sweet photo of herself and her 1-year-old daughter, Katherine. Mother and daughter are pictured on a couch together while wearing adorable matching jammies — complete with a stars, constellations, and Eiffel Tower pattern. She captioned the snap of herself smiling and her baby girl's back turned to the camera (strategically looking out the window) with "Waiting for Santa 🎅🏻."

Another Instagram user wrote, "So cute!!! I love the matching pjs!"

Yet another person commented, "Oh my gosh! The jammies are brilliant!!! Love!!!!"

Check out the cuteness for yourself.

Still, others were completely unaware that Kaling had a child until this photograph emerged. One person wrote, "I put on a serious detective hat this morning. Only recently started following you, but how did I miss a baby??"

Others noted their appreciation for Kaling's desire for privacy. One Instagram user shared, "I love that you keep baby's face away from the camera. What a great mom. ❤️💜💙💚💛."

As People reported, Kaling gave birth to a daughter named Katherine Swati Kaling on Dec. 15, 2017 in Los Angeles. Except, you would have never been able to tell she had newborn this time last year. Because unlike the overwhelming number of celebrities who share regular kid photos and updates, Kaling has opted to keep her daughter's identity extremely private. So far, she hasn't posted a single photo of her baby girl's face on social media — and I have a feeling she's going to keep it that way for as long as possible.

It wasn't until Halloween that her Instagram followers caught their very first glimpse of Katherine, according to InStyle. On Oct. 31, Kaling shared a photo of herself and her daughter wearing their Halloween costumes. Katherine's back was turned to the camera, but at least fans had photo evidence that her daughter wasn't made up. "Happy Halloween from this bottle of mustard and her little lion ❤️🦁🎃," Kaling captioned the shot.

Less than a month later, Kaling again shared a photo that included Katherine. The actress' Instagram post featured a photo of her legs and her baby girl's legs with matching pink sneakers. "Thankful for her. Happy Thanksgiving. 💖 💖," Kaling wrote on Instagram.

As much as I respect Mindy Kaling's decision to keep her daughter's face off social media, I have to admit: I'm dying to see that sweet face! Still, I'm loving that Kaling has eased up a bit on her no-kid-photos-on-Instagram policy — at least on major holidays, so far — while still making sure not to share any identifying photos. On behalf of Kaling fans everywhere, I'd like to say: Thanks so much for sharing your daughter with us this holiday season, Mindy! Because adorable toddler face or not, your Christmas Eve photo with Katherine is the cutest thing I've seen today.