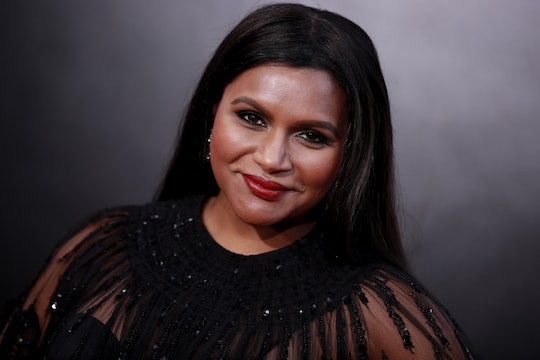 Being a single mother with ambition is a constant push-pull. It's wanting more out of every day and, sometimes, feel like you're giving less and less. Reaching for this thing you want so deeply, whatever that thing might be for you, but all that reaching pulls you away, and away from the little person you love the most in the world. And you don't want to give anything up because you know this thing you're reaching for is a part of you, but so is this person and now what? Clearly reading about Mindy Kaling's own worries as a working mom brought up some stuff for me as a single parent, perhaps because she deep down gets what it all means.

The Late Night actress and writer has come a long way since her early days as a self-described "diversity hire" for The Office in 2003, as CinemaBlend reported. Kaling was hired on as the first female writer on staff, and eventually would go on to create everyone's favorite b-a-n-a-n-a-s character Kelly Kapoor. From there, Kaling went on to create The Mindy Project (which I can tell you from experience holds up well after watching it over and over again), starred in blockbuster movies like A Wrinkle In Time and Oceans 8, written several books... basically, this woman is a force to be reckoned with.

And she's also raising a little girl on her own. According to Us Weekly, Kaling gave birth to daughter, Katherine Swati Kaling, in December 2017. And while she's been justifiably protective of sharing pictures of her daughter, she has been very open about how being a single mother has changed her life inexorably.

As Kaling told Glamour in an interview for its June issue, being on her own means she has to make different choices than she might if she had a partner.

"I had my mom and my dad. She just has me. I know at some point I will have to do less [work], because it’s not like there’s a dad at home picking up some of the slack," she told Glamour. "I think that’s another reason I work so hard — because I know that when she gets a little bit older, I want to be able to take off more time to spend with her."

This is a struggle for many single parents out there. People who want to be with their kids and they want to commit to their life's passion and sometimes... sometimes one side ends up having to give. That's the push-pull moment, the time when you're pretty sure you're not going to be able to do it all.

Kaling explained to People about one such worry recently: "When things get so bad that there’s a work emergency, I know I have to jump in there. Then when I’m working and I’m worried my baby is going to start calling her grandfather Mama, I’m like, ‘OK, I need to be back home.'"

I know this moment. I had this moment. As a young mom trying to go to school and work and raise my sons on my own. My 2-year-old woke up one night with a nightmare... and screamed for his grandmother. I quit school the next day. That was when I gave up pushing for the pull of my kid.

It's an abysmal sort of choice that no parent should have to make, and I love that Kaling is calling attention to it. With humor, sure, but there's a nugget of real vulnerable honesty in there, too. I hope her push-pull moment never comes to that. What a loss that would be for us all.