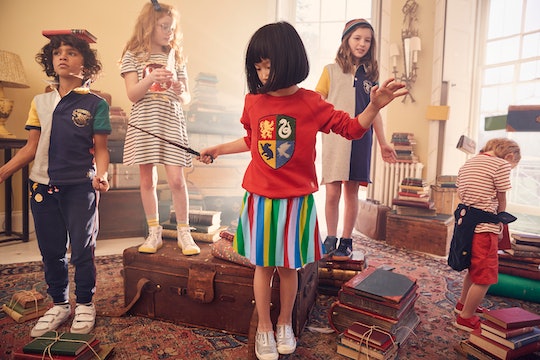 Have a Hogwarts aficionado in your household? Does your child only answer to Harry? Do you wish you had a spell you could cast that would keep your kids entertained for just one bloomin' second? Mini Boden's Harry Potter Spells Activity is the closest to real magic you're going to get, and it's 100% free. What sorcery is this?

That's right, somehow the team at Boden managed to convince the Ministry of Magic to release seven spells for your own little Hufflepuffs and Ravenclaws to learn at home. And we're not just talking about the proper pronunciation. Boden even has the goods on how to wave your wand for optimal bewitchment. It's all part of the brand's recently announced Mini Missions, a series of crafts and games designed to spur children's imaginations while they're stuck at home during the pandemic. Other "print and play" ideas include puppet-theatre building, animal adventures, fashion design, and even monster-inventing.

To make some magic at home, wizards and witches need only download the activity from the Mini Missions page on Boden's website, then, naturally, get their wand ready. What if your little wizard is wandless? Now, if we had our druthers, we'd send every little Hogwarts first year to Diagon Alley to procure their own special wand at Ollivanders. But, #stayhome being what it is, might we recommend a little craft time to help your kiddo create their own charming conjuring tool? Kids Activities Blog has a great tutorial that's in the spirit of all things Harry Potter: Simply find some sticks on a nature walk, then decorate them with glue and glitter to make a sparkly spell-crafting stick.

Once dry, the wands are ready for rehearsal. Boden's "How to cast handy spells" PDF can be downloaded and printed for easy use. We suggest taping it up on the wall so your wizard-in-training can perfect their moves. They'll be shouting "Wingardium Leviosa" and trying to make the cat fly before you know it.