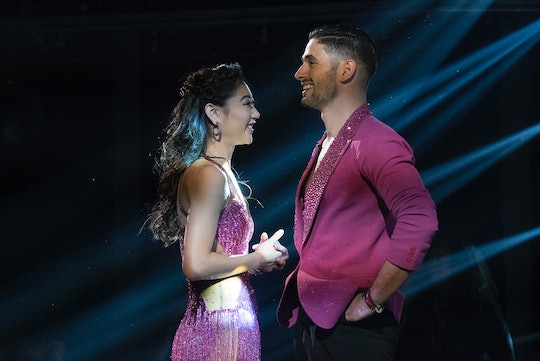 As to be expected, Week 2 of Dancing With the Stars Season 26 brought even more talent from the athlete contestants than the season premiere. Even the contestants who showed a lot of potential only got better and Mirai Nagasu's Disney-themed performance on DWTS was basically magical. Before her performance with Alan Bersten, her professional dancer partner, Nagasu's video package showed her having a slight meltdown while rehearsing for the Week 2 dance routine, so it was a welcome surprise when her Disney-themed performance was nearly perfect.

In the video, she was feeling a bit overwhelmed and said that because of her lack of dance experience, she was feeling unsure of herself. Naturally, Bersten did the only thing that a professional dancer on an ABC dancing competition show could do and took her to Disneyland to channel her inner princess. Not surprisingly, dancing with different famous Disney characters and going on different rides seemed to do the trick, because Nagasu's foxtrot on DWTS Monday night to "It’s a Small World" by The O’Neill Brothers Group earned her a near perfect combined score of 37/40. It was also the highest score of the night up until that point and meant that she also got the first 10 out of the overall season so far. Ah, the magic of Disney.

The performance itself felt more like a whimsical and fluid ballet dance than another routine on the TV ballroom floor. Bersten told Nagasu that she was going to be her own princess and that's pretty much what she was and what her performance showed the entire time. It probably helped that she was in a flowing gown not unlike that of pretty much any other Disney princess, but that just added to what was already an amazing performance on her part.

Even judge Len Goodman, who has become notorious over the years for some brutally honest critiques, called Nagasu's Disney-themed performance on DWTS the "best dance so far" of the season. With a score like 37, though, it's safe to say that all of the judges could see the magic of her performance, and considering this is only her second dance routine in the season, that's really saying something. The DWTS: Athletes season is just four weeks long, so naturally, the contestants had to bring their A-game from the first episode and that's what Nagasu did with her performance Monday night.

Fans of the dancing pair, known as Team Fire Ice and Spice, knew that something Disney was coming, as they each posted Disneyland photos on Instagram days before Week 2's episode. So the resulting dance from Nagasu channeling her inner Disney princess and Bersten's choreography with their nearly flawless performance wasn't a huge shocker, but just fun to watch.

Needless to say, if Nagasu continues to bring this kind of determination to her future performances this season, there's a good chance that she could take home that Mirror Ball trophy to go along with the bronze medal she won at the 2018 Winter Olympics. After hearing from the judges, Nagasu said, "I'm just a valley girl trying to become a ballroom dancer." Besides that being the most adorable thing she's said yet this season, it also makes you want to root for her even more.

Her Disney-themed performance definitely helped to keep her safe for Week 2 and if she can continue to look beyond any insecurities or concerns regarding her talent as a dancer, then she just might find herself competing in the finale during Week 4, bringing her that much closer to the coveted Mirror Ball trophy.