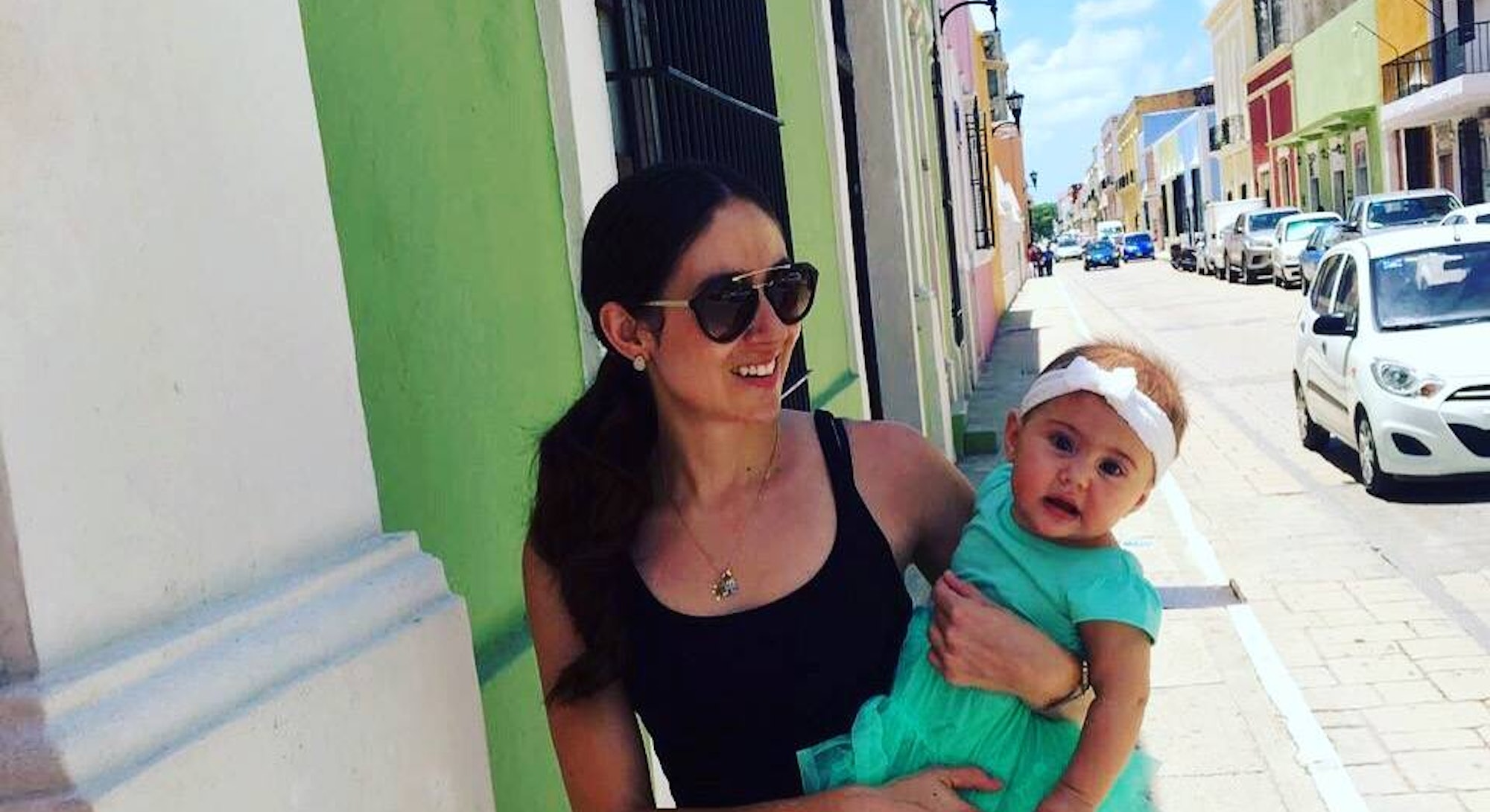 With A Baby & A False Diagnosis, All I Wanted To Do Was Sleep Or Redecorate

It was 3:27 in the afternoon and I still hadn't showered. My newborn daughter was wailing in her crib after a nap and the sound made my heart pound, but not in a happy way. My chest was tight, I felt shaky; I was having an anxiety attack. I laid face down on my kitchen floor, closed my eyes, and tried to breathe. I hadn’t had any problems with anxiety since my final year in law school, but ever since getting home from the hospital five days earlier after delivering my daughter in a difficult C-section, I now had daily, debilitating attacks.

I quickly discovered that the best place to cry was in the shower. I tried to make an activity of it: I would sob while shaving or shampooing my hair. I would extend the moment as long as I possibly could – hoping my neighbors wouldn't hear me through the cold cement walls of our apartment building in Mexico City. I cried as I held her. I cried as I tried to pump milk when I couldn’t get her to breastfeed. I didn’t sleep when she slept, as my sisters-in-law had told me to do, because I felt too stressed about everything I needed to get done around the house and with my work. Not sleeping, however, made things drastically worse.

I distinctly remember the first and only time I laughed during my first few months as a mother: I was locked away in the bathroom talking with my friend Assia on the phone. I told her having a newborn baby was awful and that she should seriously reconsider having kids. She joked and asked if I had buyer’s remorse. Caveat emptor, I laughed to myself, Latin for “Let the buyer beware.”

What was happening to me wasn’t mirrored in the carefully curated Instagram and Facebook accounts that I followed; it wasn’t in magazines. I wasn’t “in love with being a mom.” I felt incapable, unprepared and incredibly unhappy. I told no one.

The depression made me produce less breast milk, and not producing enough breast milk made me feel more depressed.

No one really thought to ask me how I was doing, either. At 31 I had lived alone in four different countries, graduated from law school with honors, networked myself into a position with a six-figure salary at a top national law firm, and then worked for the so-called godfather of international criminal law, the late Professor Cherif Bassiouni. Why shouldn’t I be able to handle being a mom?

My partner, a medical doctor, wasn’t home much during the first year of my daughter’s life. He had just finished his urology residency and was hustling 24/7 between assisting other surgeons when they called him for surgeries and spending time at his own office to build his private practice. I was on my own in a foreign country with a new baby.

Neither my lifelong dream of having a family, nor the confidence that I'd cultivated in myself over the past 14 years of adult life had prepared me for postpartum depression. The anxiety quickly progressed into full-blown sadness. Over a period of weeks after giving birth I went from sudden bouts of overwhelming emotion and stress to feeling a kind of all-encompassing pessimism about life. There were other physical symptoms, too. The depression made me produce less breast milk, and not producing enough breast milk made me feel more depressed.

The nights were even worse than the days — she would start to cry just as I was falling asleep. My eyes would shoot open; my whole-body trembled on a molecular level as if each individual cell was vibrating at the same time, furiously ramming into one another. It was dreadful. In a few months, I would begin to weigh the pros and cons of suicide — something that maybe no one knew about me, until now.

I decided to look for medical help and was referred to a young, male psychiatrist. In our first interview he was pedantic and asked leading questions. He didn’t inquire into my medical history — something that under other circumstances would have raised red flags for me. In that moment of unprecedented desperation I was merely a frightened and exhausted patient with a small child at home hoping for a quick solution so that I could take my baby on walks and enjoy learning to breastfeed like other moms.

Halfway through our first session he diagnosed me as on the spectrum of bipolar and prescribed me a heavy (and increasing) dosage of antidepressants. I remember being shocked at his diagnosis — it sounded extreme and I felt misunderstood. But he convinced me in that session that if I didn’t do as he said I risked posing a danger to myself and my child. That statement terrified me and so I listened to him. I wanted to be happy again, and above all, I wanted to be a good mom.

He made no attempt to understand how drastically my life, body, and career had changed in such a short time. He never asked about how remarkably poorly my C-section had gone or how the post-op was progressing (extremely painfully). He didn’t pause to inquire about my family or social life, and if he had he would have learned that my grandmother, who I was very close to, had died the previous month and that my best friend of over a decade was no longer speaking to me for reasons unknown. He showed no compassion for the physical, emotional and professional stress that, for me, came with being a new mother.

All I wanted to do was sleep or redecorate.

The medication he gave me had the opposite of its intended effect: I now oscillated between true mania and a deeper depression than before. All I wanted to do was sleep or redecorate. I kept telling myself to give the antidepressants a chance, but as time went on things only got worse: I felt sadder and more manic and there were no more kind of OK days. I relayed this information to my psychiatrist, and he told me that I needed a higher dosage and more therapy sessions. After four months I began to think it might be better to cease to exist. I was still rational enough to acknowledge that I had never had suicidal thoughts before. I made the difficult decision to look for a different kind of help.

According to the Centers for Disease Control, one in nine women experience postpartum depression (PPD), a conservative count according to some, while perinatal mood and anxiety disorders (PMADs) as a whole affect even more men and women. According to ab overview of medical literature on the blog PostpartumProgress by pediatrician Natasha Sriraman, M.D., PPD goes undiagnosed up to 50% of the time. There is no official statistic for how often it is misdiagnosed as bipolar mood disorder.

In March of this year, the FDA announced a new drug, Zulresso, specifically targeted to postpartum depression. The treatment costs US$34,000 and has to be administered by a trained medical professional for 60 hours via IV. I don’t believe I would have been able to leave my baby for 60 hours to get this treatment. I don’t know if it would have helped me. But I know that the course of treatment I was given by my doctor made things exponentially worse.

I was able to fully come out of the depression about 10 months after ending the anti-depressant I was on and making a very concerted effort with daily physical activity, meditation, and other little things that helped, like buying fresh flowers and practicing positive affirmations. But it took a long time and there was no magic shortcut. Most importantly, I found a wonderful female psychologist. She helped me re-tell the story of my pregnancy, C-section and postpartum period in a way that I was able to be compassionate to myself, instead of judgmental. My therapist also helped me realize that I was in good company with my PPD misdiagnosis. Women with PPD (among other PMADs and sleeping disorders) are regularly misdiagnosed, particularly women of color, and prescribed the wrong types of medications as treatment — a potentially deadly mistake.

"The problem is that women are so vulnerable when they are not well and seeking help; it's hard to know that the person you're seeking help from is an expert, or good at their trade," explains Dr. Catherine Birndorf, a reproductive psychiatrist and founder of The Motherhood Center of New York. "So, its complicated in that sense. How do you know if they're the right person to treat you?"

Birndorf recommends having a designated healthcare advocate — a friend or family member or doctor who can act as a sounding board and second opinion. Complicating things, some level of distress is common as mother adjusts to a new life after baby — Birndorf points out that, per the National Institutes of Health, 80% of new moms experience the baby blues, which are not classified as a perinatal mood and anxiety disorder (PMAD). "After a couple weeks you should feel more emotionally stable — if you don't that could mean that you are experiencing postpartum depression (PPD) or anxiety, which is an important point, because a lot of times PPD feels like anxiety, not depression, but it needs treatment," she says.

Before I had my daughter, I read that if a new parent felt overwhelmed in a particular moment then that person should put the baby down in a safe place (like a crib without any blankets or pillows) and take a few minutes to calm down and be able to safely care for the baby. Because of my struggle with postpartum depression, I had to do that quite often. And perhaps as a result of those moments alone, my daughter learned to entertain herself and self-soothe better than most kids her age. She is now a healthy and happy toddler who loves books, singing, and dance, and shows compassion for others. She laughs, a lot. I realize that even though it was an incredibly difficult struggle for me to raise her while battling postpartum depression, I did a great job.

I have debated writing this article for over three years, in part because I was afraid of what people might think about me and in part because I was afraid to take an honest look at how bad things got. But every time I hear my daughter’s laughter and see her smile, I am so thankful that I had the courage to question a treatment plan that wasn’t working for me. If I had never asked for a different kind of help, however, things could have turned out very different.

A prospect that no new parent should have to worry about.