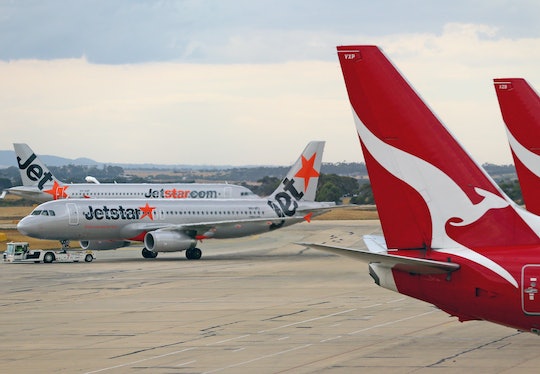 Flying with children is its own special boss-level round of parenting: It doesn't matter if your kid is 2 months old, 2 years, or 12 — flying with kids is no easy endeavor. And it's not just a challenge for parents: Fellow passengers and airline crew all get to join in the on the fun by the sheer nature of traveling in a flying tube. That's what makes this story out of Australia all that more awful: Sydney mom Laura Kimber alleged she was banned from flying home because of her toddler's tantrum on their arriving flight.

Kimber, her partner, and her two twin boys traveled to Hamilton Island, just off the northeast coast of Australia, for vacation, according to Redbook. After an incident on the flight to the island, Kimber alleged that Australian airline Jetstar banned them from getting back on the plane when it was time to fly home from their vacation. Speaking to The Daily Mail, Kimber explained, "As they prepared the cabin for landing, Matteo, one of our twins was really overtired - it was past nap time. He was a bit cranky and he was throwing a tantrum."

Her son's tantrum occurred on their flight to the island, when she said that her son then threw himself down on the floor of the plane. While this isn't necessarily unusual behavior for a 2-year-old, Kimber alleged the flight crew were less than sympathetic: "At this stage I had a really rude air hostess come up and sternly say to me, 'You really need to get him off the floor or we're going to have to circle the plane because of you.'" Neither Kimber nor Jetstar immediately returned Romper's requests for comment.

The mom was offered a lap belt extender so she could hold her son in her lap. By the time they landed, Kimber said, her son was calmed down and was fast asleep. But apparently, the damage had already been done. Before disembarking, Kimber said she was warned by a Jetstar employee — it's not clear if it was a member of their flight crew — that it was entirely possible they could be refused to board their flight home. And that's what Kimber claimed happened on Feb. 22.

Kimber said that when her family tried to board their previously-booked flight to return home, they were stopped by a gate agent during boarding, and asked to step aside. It was then, Kimber alleged, that they were told they would not be allowed onto the flight. "We asked again if we were going to get on and the lady said, 'At this stage you've been refused and you're not going to get on the plane,'" Kimber said. "We were pretty shocked and upset."

In a video capturing the heated exchange between Kimber and an airline employee, a voice that is reportedly from an airline employee says, "It is the way you guys reacted over the two-year-old kid." Jetstar has refuted this claim. A Jetstar spokesperson told The Daily Mail that Kimber and her family were not allowed to board due to "disruptive behavior" at the boarding gate for their flight home, and not her child's behavior. The spokesperson for Jetstar continued: "Thousands of infants and children fly with us every day and we do not ban a passenger from flying due to a child’s behavior."

While this definitely appears to be a case of "she said/airline said," there's no denying that flying with kids is far from easy. If anything, Kimber's incident serves as a double-sided reminder for anyone flying with kids, whether you're a passenger, parent, or crew member: Cut parents some slack on planes, and, parents, remember you're not the only people on the flight.