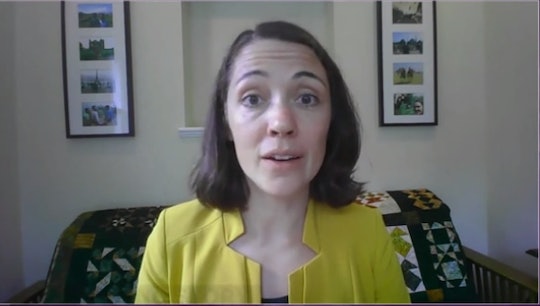 If you watched CNN's interview with Gretchen Goldman, research director for the Center for Science and Democracy, you saw a composed, intelligent woman offering expert scientific commentary. Now, if you saw her viral tweet afterwards, where this mom captured two sides of work-from home life, you got a more "honest" look at what was happening and oh boy is it refreshing to see.

Like many parents nowadays, Goldman is working from home full-time while also raising her children, two little boys aged 2 and 4 years old. She's frequently called upon as a news contributor for segments on CNN, sometimes without a whole lot of time to prepare. As she told BuzzFeed News, she was given about "45 minutes to prepare and that's prepared both in terms of content and appearance." She added that "because of expectations on women on camera, a significant part of that time has to also be spent on my physical appearance and then getting the right setup."

During her interview with CNN's Wolf Blitzer to discuss President Donald Trump's recent appointment of climate change denier David Legates to the National Oceanic and Atmospheric Administration, Goldman was filmed in a yellow blazer from the waist up with a nice, calm looking background.

A tweet she shared on Tuesday shared an honest, behind-the-scenes look: a woman in black bike shorts surrounded by toys all over the living room floor with her laptop perched on a kitchen chair. "Just so I'm being honest," Goldman captioned the photo.

Parents who are working from home and struggling to find any sort of balance have been responding to Goldman's tweet in solidarity. Messages like, "OMG I love this. This is me on almost every business meeting," while another person noted that moms working from home need to see both images to feel as though they are not alone. "This unfiltered glimpse into your reality is so important for the mental health of working moms in a pandemic," one commented. "If they only see the left image it can be very disheartening. The right image allows them to have a knowing laugh and cut themselves some slack."

For her part, Goldman told BuzzFeed News that while she feels "privileged" to be able to work from home safely during the pandemic, she worries about how the pressure will affect the careers of moms down the line. "I am very concerned with how this is going to adversely affect women's careers, especially in science where women are already underrepresented, and people of color are underrepresented, and this is going to exacerbate and dismantle a lot of the progress that we've made on that diversity," she told the news outlet.

In July, The New York Times published a survey that found the pandemic has disproportionately affected the careers of moms working from home, and it doesn't appear to be getting any better. Women are losing their jobs because their kids are making too much noise, or finding their hours scaled back or their job performance slipping because of the constant stress.

There is solidarity in knowing you are not alone and Gretchen Goldman's tweet helps highlight just how tricky this work-from-home situation is for so many parents right now.