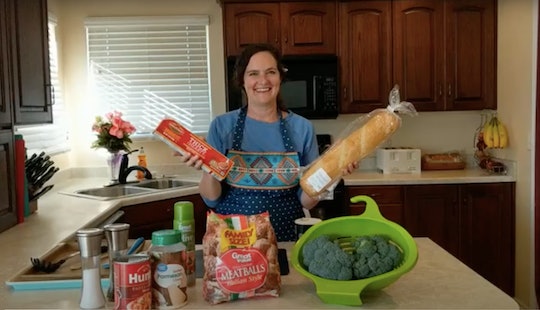 There's Now A 'Mom, How Do I?' YouTube Channel To Teach Us All Practical Life Skills

Being an adult isn't that much fun without a few vital skills, like cooking a great spaghetti dinner or actually getting laundry done. But not everyone has someone who can teach them the joy of making a simple pasta, how to fold a fitted sheet, or how to cure a bad headache. So, after getting inspired by a dad's viral YouTube page teaching basic life skills, one mom has created a YouTube channel called Mom, How Do I? to help and teach viewers the world about the fine and beautiful art of adulting.

A woman who is just calling herself "Mom," so you know she means business, has decided to share some of her best advice for how to get by in life in a series of short YouTube videos on her new channel. In a video posted last week, she said she was inspired by Rob Kenney, a dad whose own father left him and his siblings when he was a child and launched his now-viral channel Dad, how do I? to offer helpful tips. His videos teach people skills like how to tie a tie, how to change a tire, and how to fix most running toilets. In just over a month, Kenney has amassed 2 million followers on YouTube.

"I thought it was an amazing idea to help people who don't have a dad, or aren't close to their dads, or just want to learn how to do dad things," she said in an introduction video about Kenney.

She also gave her viewers a little of her own backstory. As the oldest of 12 children, she shared that she had to "learn how to do mom things from a young age." She is also a mom of six herself who stayed home with her kids and wanted to share her wealth of knowledge. "I'm not trying to take away from his channel or any channel like it," she said in her introduction video. "Instead I wanted to see a how to channel for how to do mom-type things, things that everyone, no matter your gender, would need to know."

So far, this mom has a following of nearly 10,000 people, which is seriously impressive considering she just got started last week. Her most popular video to date? A video on how to do laundry and how to get out "those stubborn stains." Several viewers commented on the video to say how much they appreciated her help. "As someone whose mom doesn't teach them anything, I'm gonna become a regular viewer from now on," one wrote, while another said, "I was a foster kid so never had a mom to ask how to do things. Great idea keep it up."

There are so many skills to be learned from a mom, perhaps especially a mom who has raised six kids, but not everyone has had that opportunity. This mom, however, is helping — teaching her viewers how to sew buttons on their shirts, fold fitted sheets and yes, even make an amazing spaghetti dinner.