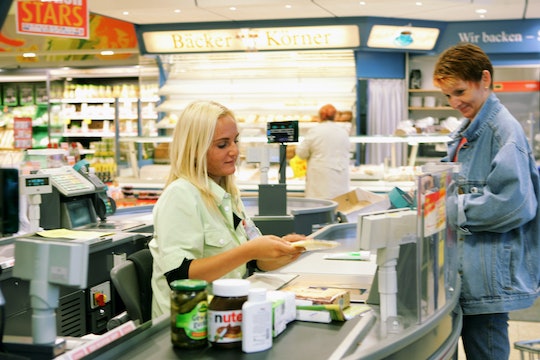 Moms Are Paid Less Than Fathers In Every State

The gender wage gap is terrible for women, but it's also terrible for families. According to a study published Monday, moms are paid less than fathers in every single state, and at every single education level. Which means that parents should be bringing in a lot more cash, especially single moms and same sex parents. If there was ever proof that the gender wage gap affects everyone, it's this study.

According to the National Woman's Law Center, there are 22.8 million moms with children under 18 years old in the work force and the majority of them work full time. Women in the United States already get just 80 cents on the dollar, but it turns out that when it comes to the wage gap between moms and dads, the women are pulling in only 71 cents on the dollar, which is a loss of $16,000 a year. This is true across education level, occupation, age, race, and location. If you told families everywhere they could be making almost $20,000 more a year, a lot more people might call themselves feminists.

Making this even worse is that, in 2015, 42 percent of moms were the primary or only source of income for families and only 22 percent were co-earners, which means that families need the woman's paycheck.

The numbers are insane. A mother with a high school degree, for example, makes 60 cents for ever dollar a father with a high school degree makes. Fathers with a masters degree make about $110,000 a year on average. Mothers with a masters degree? That'll be $90,000. Trickle down economics is known not to work, but the wage gap does trickle down — in a bad way. That single mom, for example, making $20,000 less a year than a father will have a harder time starting a college savings account for her kids. Kids take out more loans for higher education. They have more debt as adults. And then the cycle repeats itself.

It doesn't matter where you live either, so if you think your family is better or worse off in any part of the country, you're fooling yourself, though the gaps do vary in size. Delaware has the smallest gap between moms and dads, so mothers make $10,000 less every year than fathers. In Utah and Louisiana, mothers make as much as $25,000 less than dads.

Ironically, in Utah, Republican lawmakers are specifically fighting against equal pay for women saying that it's "bad for families" because it keeps moms out of the home. James Green, the leader of Wasatch County's Republican party wrote in a newspaper fighting against an equal pay law that it was "simple economics":

If [companies pay women equally], then men will have an even more difficult time earning enough to support their families, which will mean more Mothers will be forced to leave the home (where they may prefer to be) to join the workforce to make up the difference.

That was this year. Eventually, Green was forced to resign over his comments, but this idea persists, despite the fact that 38 percent of Utah's single moms live in poverty. The economics seem pretty simple, just not the way some Republicans think. Hopefully, instead of fighting to against equalizing salaries, lawmakers and employers will start to see that paying women, and especially mothers, an equal salary as their male counterparts is just good for everyone.