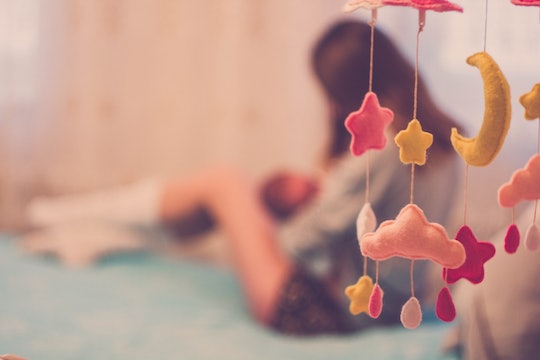 The result of a pregnancy is often the introduction of a new, magical bundle of joy into the world, and the new baby rides off into the glorious sunset with his or her enamored parents. Or something like that. In reality, though, pregnancy itself is incredibly taxing on a woman's body both before and after she gives birth — meaning that the idea of going back to an even more joyous version of business as usual is mere myth for many. Enter one mom's postpartum body Instagram, which reveals an essential truth about growing another human inside of you for months, as well as what can happen when all of that culminates in less-than-ideal birthing circumstances. For Ruth Lee, that meant "a traumatic labor, cesarean section, scars, stretch marks."

But the Utah blogger, who was 25 years old and healthy when she gave birth, wasn't afraid to bare it all online with the goal of showing other women that a post-pregnancy body is nothing to be ashamed of. Nestled among flawless photos of her adorable baby daughter, a stunning wedding photo featuring her pregnant belly, and even some convincing makeup endorsements are images that don't shy away from the effects pregnancy had on her body. One in particular is a closeup of her stomach still fresh from the C-section, with bandages and stretch marks in full view.

"I took this picture a few days after I gave birth, when my [postpartum depression] really first reared its head into my life," the caption read, in part. "I took this and actually was horrified. I couldn't believe it was me. I'm sharing it because I know in my heart that there are people out there that struggle with inadequacy. That might think they are not beautiful, that they might be ruined, less worthy, or not good enough."

Using the hashtag #StopCensoringMotherhood, Lee encouraged her followers to actively reject the idea that the messy parts of pregnancy should be hidden away. She urged them to instead embrace all their "flaws" and to love themselves and exactly what they look like, writing:

Be kind to yourself. And know that you are not alone. Comparison is the thief of joy. Don't let social media taint your view of what is beautiful, what is REAL. And above all, know that if you are struggling, I am here.

She even shared another photo of herself wearing a diaper right after having her baby daughter, Presley. And it's so awesome because, in the image, she's in a POWER POSE, writes in the caption that she feels "victorious," and celebrates her stretch marks as "so bad ass and beautiful."

Lee's downright enthusiasm about her post-C-section body body is a big deal because she's adding one more voice to the growing number of women willing to break the taboo associated with the less-than-fairy-tale perfect side of pregnancy. Whether it's Adele and Chrissy Teigen talking openly about their postpartum depression or celebrities like Drew Barrymore and Kristen Bell being honest about how pregnancy and giving birth changed the way they look, it's all a step in the right direction. After all, pregnancy in general and C-sections in particular are hard, and there's no reason to hide that.