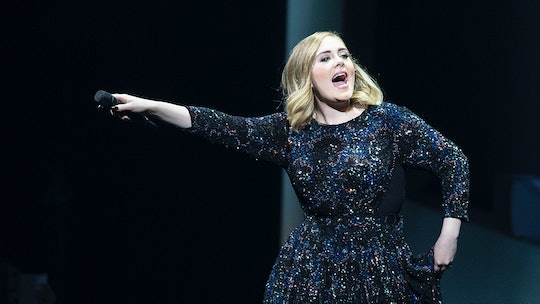 Although he wasn't present for any of the interviews Adele granted Vanity Fair's Lisa Robinson for the magazine's December cover story about her, the singer's 4-year-old son, Angelo, permeates nearly every scene. The 10-time Grammy winner says she would walk away from her current 43-city world tour if she detected that it was interfering with her relationship with him; she describes how she's become risk-averse because she needs to always be there for him; she elevates the commitment of having a child with her boyfriend, Simon Konecki, above that of potentially marrying him. Also, before she told Robinson that "My entire life revolves around my child," Adele divulged that she experienced postpartum depression — and that fact is not at all at odds with the unalloyed devotion she has for the boy.

"My knowledge of postpartum — or post-natal, as we call it in England — is that you don’t want to be with your child; you’re worried you might hurt your child; you’re worried you weren’t doing a good job," she told Robinson. "But I was obsessed with my child. I felt very inadequate; I felt like I’d made the worst decision of my life ... It can come in many different forms."

It's absolutely revelatory that someone as high-profile as Adele is talking candidly about her struggle with depression in general ("I'm very available to depression," she says at another point in the interview) and postpartum depression in particular. These are sometimes taboo topics, and it's oftentimes considered shameful for new moms to be anything less than thrilled and glowing after they usher a life into the world for the first time (an experience that can actually be traumatic). Adele shows us that feeling depressed after having a baby is normal, natural, and not at all indicative that a woman is ill-equipped to be a loving mother — as common myths about the illness wrongly suggest.

But the Hello singer didn't stop there: Beyond making the important move of bringing the issue of postpartum depression into the fore, she detailed how, despite feeling guilty, she did something about it, for both herself and her child. Realizing that taking some solo time doesn't diminish her status as a capable mother, Adele committed to spending one afternoon a week doing "whatever the f--k I want without my baby."

And in a world where Chrissy Teigen gets buried in criticism just for going out to dinner after having a baby, that's a beautiful, beautiful thing.

"A friend of mine said, ‘Really? Don’t you feel bad?'" Adele said of her decision. "I said, I do, but not as bad as I’d feel if I didn’t do it. Four of my friends felt the same way I did, and everyone was too embarrassed to talk about it; they thought everyone would think they were a bad mom, and it’s not the case."

Adele is the woman who gave us moving anthems like "Chasing Pavement" and "Someone Like You"; she also unabashedly uses coarse language, peppering her speech with more f-bombs in one interview that I can count. She proudly told Robinson that she recently had not shaved her legs in a month, and she didn't really care about what her boyfriend had to say about it. She's talked openly about growing a pregnancy "beard," and she choked up onstage the first time Angelo attended one of her concerts. She's also a fiercely protective and selfless mother who also happens to suffer from postpartum depression. It's all part of the package.