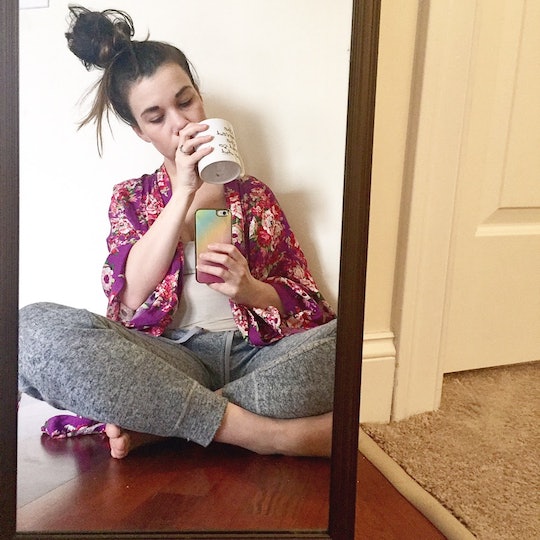 Moms Should Get A Raincheck On Plans For An Entire Year, Don't @ Me

I gave birth to my first child in September 2017, and since then, I can count on one hand the amount of times I left the apartment without a diaper bag in tow. And, on all of those occasions, my “outing” was simply a solo trip to Target or a quick coffee run. Want to know how many times I’ve gotten together with friends without my baby since she was born? Zero. Yes, zero. And I don't want to feel bad about that. I believe that moms should get to cancel plans for an entire year after they have a baby without any penalties.

It’s not that I haven’t made plans — I have, several times. But as the date approached, the idea of leaving my apartment for an extended period of time (not to mention having to pump while I was away) began to become more daunting than ever. I’ve cancelled on coffee dates with close friends, playdates with fellow moms, and wasn’t even able to make it to my best friend’s baby shower (granted, she lives 300 miles away from me, so that was a pretty fair excuse). But before my daughter got here, I truly had no idea how much of a production it would be to leave my house — with or without her.

When I take my baby on an outing, I have a running mental list of things that I need — and the emotional labor behind it is indescribable. I have to make sure we have enough diapers, a change of clothes (in the right size), plenty of burp cloths and blankets, toys, pacifiers, wipes, and hand sanitizer. I have to remember to grab her favorite teething toy — the one that’s usually on the floor somewhere inside my living room — and I need to double check the diaper bag to ensure that there’s not something unpleasant left over from our last outing. And that’s all on top of remembering to grab the things I need too.

Some outings are unavoidable. Trips to the pediatrician for her checkup, a grocery run when we’re out of milk, a dash into the post office when I have a package to mail — those tasks are mandatory, or at least pressing enough that I don’t put them off. But get-togethers with friends, in my mind, are a bit more flexible. My friends will understand; my fridge (or husband when he realizes that we don’t have anything to put into coffee) less so.

And it’s not just the logistics of getting out with or without my baby that sometimes stops me from keeping plans. It’s the fact that life with a baby is supremely unpredictable; every day is slightly different from the day before. There have been days when my daughter is so cranky that the idea of taking her out for a quick car-ride (let alone a visit with other humans) is too overwhelming to conceive of. And there’s also the consideration that we’re in the midst of peak flu season; why risk her health?

While some people might think I’m being a little extreme, I know that I’m not alone in feeling this way. Having a baby — especially for the first time — is all-consuming, and so very draining. There are days when it’s takes a considerable effort to shower or brush my teeth, so how I can I be expected to put on an outfit and go out and be social?

Truth be told, it’s the kind of experience that’s hard to understand until you’re in the trenches of new parenthood. During pregnancy, it’s easy to imagine a neatly organized diaper bag, a giggling infant in the shopping cart, or a well-behaved baby sitting peacefully in a high-chair while you catch up with your best friend over a latte. The reality is pretty different. There’s a constantly messy home, a life lived in sweatpants, the fog of sleep-deprivation — and in those moments, the only thing that provides any sense of normalcy is a solid routine. Breaking that routine can be scary, and it sometimes just doesn’t feel worth it.

But you know what? New moms get a pass to be antisocial — and, dare I say it, we get a pass for a whole goddamn year. We’re dealing with more than you could ever imagine, on top of recovering from a physical trauma (plus now having a body that doesn’t feel like our own). We get unlimited rain checks for that first year of our baby’s life, while we’re trying to navigate uncharted waters of sleep training, breastfeeding, and constantly worrying about our tiny little humans. We get to cancel plans whenever we feel like it, and everyone else needs to just simply understand.

The thing is, we don’t really want to cancel those plans. We’d love nothing more than to grab a coffee (or a cocktail) with our best friends, go shopping for an afternoon, or linger over a long brunch. But sometimes it’s just too hard to do the things that we used to do with ease and without a second thought. And that’s okay. It’s okay to want to stay inside for months, it’s okay to live entire seasons in sweatpants and leggings. Because one day, these babies won’t be babies anymore. And we’ll get outside again, we’ll shop again, we’ll socialize again. This too shall pass, and someday, we’ll cash in on all those rain checks. So hang on, friends. Be patient, and let us have this year. We’ll make up for it eventually.