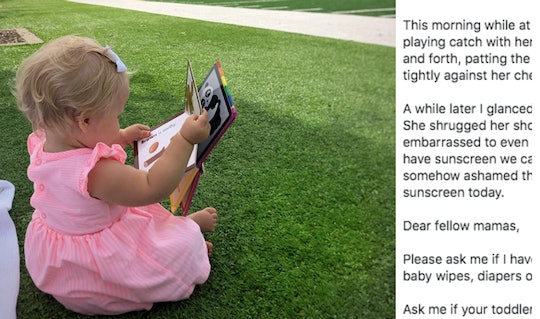 It's really hard to ask for help when you're a mom. When I was raising my four boys on my own, I liked to pretend everything was fine. All the time, everything was fine. I think I was trying to prove something to myself and everyone else, but I wish I could tell you exactly what I thought I needed to prove. The truth was I needed help. The larger truth was, there were plenty of people out there who wanted to help. Which is why this mom's viral Facebook post reminding parents that we all need a little help sometimes hit me so powerfully. Because we're all rowing that same boat and it's a lot easier if we're rowing together.

Shelby Beck from Green Bay, Wisconsin was at the park recently when she noticed a mother of two playing with her toddler. As Beck, herself a mother of one little girl, wrote in a now-viral Facebook post, "This morning while at the park I noticed a mama playing catch with her toddler as she swayed back and forth, patting the tush of the newborn tucked tightly against her chest." Both mothers were apparently content in their own space at the park, until the other mother seemed to be in need of some help.

"A while later I glanced up to see her approach me," Beck continued on Facebook. "She shrugged her shoulders and quietly said 'I’m embarrassed to even ask, but do you happen to have sunscreen we can use?' As if she was somehow ashamed that she forgot to pack sunscreen today."

Of course, most moms out there know it can be difficult to ask for help, particularly if you're asking a stranger. But Beck's reaction should be the benchmark for all parents when it comes to helping each other out.

Beck's Facebook post — which had more than 189,000 reactions and 161,000 shares as of Wednesday afternoon — concluded with an open letter to "fellow mamas."

"Please ask me if I have sunscreen," Beck wrote. "Ask if I have baby wipes, diapers or even extra snacks. Ask me if your toddler can sit down and play with us while you find a shady bench to nurse your newborn. Hand me your phone and ask me to take a picture of you with your sweet babies — we all know mamas aren’t in enough photos. Ask for help. Ask for love. Ask for anything."

She continued, "Even though we are strangers, please ask me. It’s not easy being responsible for little humans but it’s easier if we help each other out. We’re all in this together."

The thoughtful mom tells Romper that she wrote the viral post that's hit home with so many people on Facebook quickly after her experience. "I had tears in my eyes as I typed it because, although it seemed so simple to help another mama out, I know she felt bad about asking," she says. "I know that most women would step up in a heartbeat to help."

Asking for help might be difficult, but I think this mama is exactly right. If you think about the fact that you would happily help another mom if she were to ask, it might be easier for all moms out there to start reaching out to each other. To create a community where it's no big deal to borrow a few wipes or get a squirt of sunscreen or whatever. These are the kind of interactions that help moms get through the day. And if we can all lend a hand getting each other one step closer to the finish line, why not?