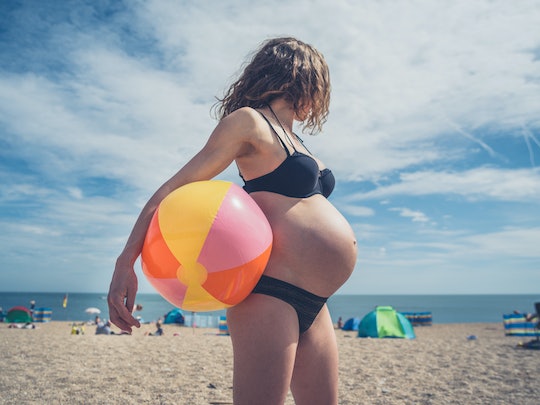 Summer in Texas and summer in New York are two different, but equally horrible, experiences. Living in New York during the summer means smelling rancid garbage while dealing with high humidity. In Texas, summer means being suffocated by the haze of the heat. And these summers are only bound to get worst. New research has suggested that more people will die from extreme heatwaves in the next six decades, which could have a bigger impact on pregnant women.

A new study published in the journal PLOS Medicine found that heatwave-related deaths will rise significantly by 2080 if people can't adjust to the rising temperatures cased by climate change, according to USA Today. In particular, researchers from Monash University in Australia developed a model estimating the number of deaths from extreme heat in 412 communities across 20 countries over 49 years, and discovered that, in the worst case scenario, heatwave fatalities would jump 471 percent in Australia between 2031 and 2080 compared to the period between 1971 and 2010, USA Today reported.

The increase in deaths would begin the world's subtropical and tropical regions before reaching Australia, Europe, and the United States, the study found.

Future heatwaves in particular will be more frequent, more intense and will last much longer. If we cannot find a way to mitigate the climate change (reduce the heatwave days) and help people adapt to heatwaves, there will be a big increase of heatwave-related deaths in the future, particularly in the poor countries located around the equator.

Pregnant people are especially vulnerable to the effects of extreme heat, such as rash, dehydration, heat cramps, heat exhaustion, and heat stroke. And those heatwave-related effects can have a tremendous negative impact on your fetus.

Extreme heat, for example, can cause pre-term contractions or pre-term labor, which can affect your baby's growth and development, according to Baby Gaga. It can also increase your fetus's chances of developing a birth defect primarily affecting the spinal cord and brain, Baby Gaga reported.

What's more, research from the U.S. National Institutes of Health found that exposure to extreme temperatures — whether it's extreme hot or extreme cold — during the entire pregnancy, or second and third trimesters, may increase the risk of babies being born at a low birth weight. Low birth weight refers to newborns weighing less than 5.5 at birth.

During heatwaves, pregnant people are also more susceptible to infections, which can lead to fever and pregnancy complications that can harm the fetus, according to Baby Gaga. Furthermore, strokes caused by extreme heat can also lead to miscarriages and maternal death, Baby Gaga reported.

As temperatures continue to rise, it's important pregnant people keep themselves cool and hydrated — especially if they find themselves for most, if not all, of the summer. Drink plenty of water, stay indoors and near a fan or air conditioner, and visit your doctor right away if you are experiencing any symptoms of heat exhaustion or heat stroke (if you can't stay indoors, apply sunscreen liberally). Also, make sure to cut down on caffeine and lower your salt intake so you can stay hydrated for longer. Taking these steps can mean the difference between life and death for you and your little one.