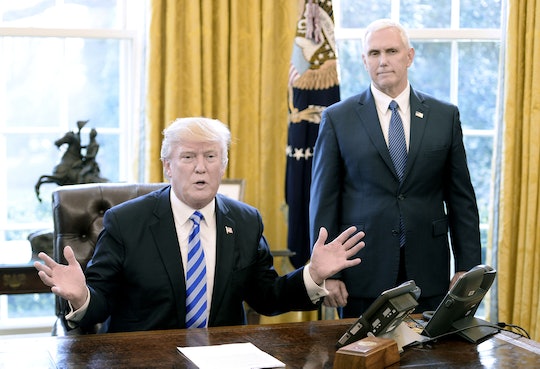 Just after President Trump took office in January, a picture was released of him, surrounded by all men, signing an order that would affect funding for women's health care overseas. In late March, a similar photo featuring Vice President Mike Pence discussing health care with an all-male panel went viral with jokes about how a group of men was yet again deciding on women's issues. On social media, it's easy to assume that the jokes are made by a subset of politically correct people that are "too concerned" about diversity, but research actually shows that most Americans dislike when men make decisions on policies that affect women without input from women themselves. It's not about politics, it's about everyone having a representative voice.

A recent study run by Amanda Clayton, a researcher at Vanderbilt University, along with colleagues Diana Z. O'Brien and Jennifer M. Piscopo, consisted of showing a group of Americans a fictional news article about a ruling on sexual harassment. One test group read a version of the article that included opinions from only male legislators, another group read a version that had a committee of both men and women deciding on policy. The findings? People don't trust all-male panels deciding on women's issues. The research also showed that most men dislike the exclusion even more than women do.

So why would the Trump administration keep making the same mistake of showing photos of all-male panels deciding on issues that affect primarily women?

In a summary of their findings in The Washington Post, Clayton and her team suggested that the Trump administration is offering up pictures of all-male panels on purpose. That conclusion is based on the idea that Trump's campaign appealed to a certain sect of male, white voters that have been feeling "left out" of the American process for the past few election cycles. In that sense, showing an all-male, mostly white panel of men signing off on policy comforts Trump's base. But most Americans aren't on board with that, according to Clayton's findings.

Although Trump has nominated women into his Cabinet and given his daughter a senior advising position, his administration continues to exude sexism in public. Even fictional White House communications teams in Shondaland would know better than to show a male president signing off on an anti-abortion law surrounded by all white men. Anyone who's seen even one episode of Scandal could be a better press adviser to the current commander in chief when it comes to optics in this way. Much like Clayton found in her study, it just feels wrong.

Yet Trump's IRL team continues to just dig their own sexist hole releasing photos of white men discussing issues that affect women without women involved at all.

There's something to be said for the value of hypocrisy in politics, according to this study done by Clayton and her team. Maybe women were never really given a seat at the table when it comes to decision making in D.C. Women, and especially women of color and other marginalized demographic groups, are used to be left out of the bigger conversation. But Trump's team hasn't even pretended to invite women, or anyone else, into the discussion, aside from giving away some token jobs. Instead, the administration releases photos of men around a table deciding on healthcare without any irony.

The backlash on Twitter about those all-male teams might seem funny, but it isn't. According to Clayton's studies, most Americans feel that a group of white men deciding on policy that affects all Americans, of all genders, races, and socio-economic groups, is just not the best way to make progress. If anything, it simply doesn't look good.

Clayton's study and common sense shows that this way of doing politics won't last much longer. Maybe they should have a Scandal viewing party at the White House before the next big policy decision. In the name of optics, if nothing else.