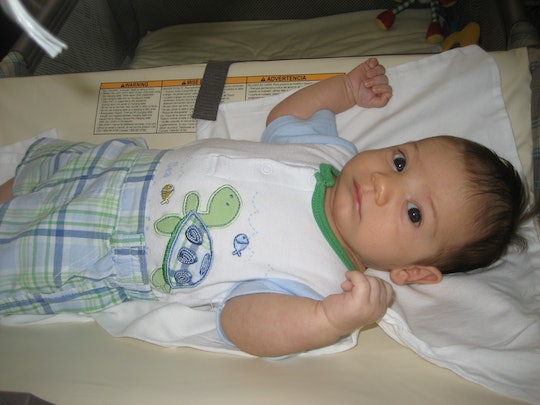 Motherhood Changed My Life... But Society Doesn't Want To Hear That

When I was pregnant the first time, I was constantly thinking about becoming a mother. I was about to take on the biggest responsibility of my life and I’d be lying if I said baby thoughts didn’t consume me. But did I admit that? Nope. And months later, did I cop to the fact that I spent a good part of my waking moments cycling through ideas and thoughts and concerns that had to do with my kid? Nope again, because I knew that even though motherhood had changed my life, no one wanted to hear about it.

I felt a lot of shame. Was I abnormal to be consumed with thinking about the well-being of my child, home with her caregiver, while I was at work all day? I must be, since no one else was talking about their kids nonstop. Sure, there’d be the occasional break-room conversation with a fellow parent, touching lightly on sleep deprivation or teething tips, but we never spoke about ourselves as parents (other than being tired, which I was — for different reasons — before kids, so that wasn’t particularly life-changing). I felt like I must be alone in feeling that I was simply not the same now that I was someone’s mom. And if nobody was admitting to that same feeling, I needed to squash it. I didn’t want the office to sense that I was somehow less capable now that I had a baby.

Motherhood is BFD, and we need to hear that more.

Because that is the default perception still: that moms are diminished as employees because of their kids. And there is proof: while working mothers’ salaries take a hit or plateau once having kids, working dads’ pay climbs, per studies by CUNY and the University of Massachusetts, Amherst. It was no wonder so few women in my office chose to speak freely about the role motherhood had played in their lives when at work. I mean, we talk about everything else that defines us: what teams we root for, what TV we watch, how much we hate lunch meetings because the vegetarian options are always the worst.

It took me until my children were 10 and 7 (last year), to stop hiding how motherhood changed my life.

Part of the reason I decided to be more transparent about my life outside work was that I was just a full decade older, and had racked up more life experience, which I think helped build confidence. But I shouldn’t have to “earn” the right to announce, without consequence, “Motherhood is BFD, and we need to hear that more.”

I would have returned from maternity leave much less panicked about being a productive employee, and feeling much less guilty for giving brain space to my child during the work day, if more parents had been more vocal about their families. But when society holds motherhood against its employees, they stay silent, frantically trying to “work around” the fact that they have children.

That’s why I refuse to use the word “balance.” There is no balance between work and life; one is enmeshed with the other. I would be sitting in meetings while I was pregnant, jotting down notes, brainstorming ideas, while I continued to marvel at the fact that inside my body, I was creating a person. Motherhood was changing me, right there in that conference room. It was weird and amazing but never distracting.

The ways motherhood changed my life didn’t have a negative effect on me. The change was good for me. I felt like I had less time, so I prioritized better, used my resources more wisely, worked smarter, not longer. I had to learn to communicate with toddlers and — guess what! — those same techniques (asking simple questions, giving clear directives, not offering too many choices) work great with professional adults. A fellow mom friend, with a big job and two little kids, used to joke with me that we could actually get everything done in a 4-hour work day because of how efficient we learned to be as mothers.

Women don’t feel they can speak, without being judged, about something that men don’t experience.

Though I think a lot about my kids and my responsibilities as a mother, while I’m at work, doing so does not encroach on the brain space I need to do for my job. One of the changes motherhood brought was that my thoughts as a parent pushed out other, non-crucial, stuff that was taking up space in my brain. My social life is much simpler now that I have kids. My routines are predictable, since our kids rely on us for stability. Though I have more decisions to make for other people, I have fewer decisions to make in other aspects of my life. And that has been kind of great (though I look forward to a time in the near future when I can afford to put brain space back towards planning international trips with my husband).

For my first 10 years as a mom, I compartmentalized my kids while at work, and I tried to do the same with work when I was home. Unless I was dealing with something urgent, I did not look at email or answer the phone from the time I got home until my children were asleep. The world, I thought, could wait a couple of hours. (I work in TV; I understand not all working parents have the luxury to eat dinner without interruption.) This method mostly worked, but it I found it was better designed for a robot than a human. I had emotions. I had times when I wanted to keep working on a project instead of playing Uno with the kids. And there were many class trips I wanted to go on, when work demanded I travel elsewhere.

I don’t believe moms will ever be able to feel free to talk about how motherhood has changed them until our society recognizes that we are holding women to standards constructed by men. Of course women don’t feel they can speak, without being judged, about something that men don’t experience: the norm in American culture is white and male, with associated qualities (strength, machismo, stoicism) prized above qualities deemed female (emotion, empathy). Being “changed” by motherhood translates to having perspectives that men may not understand. Our patriarchal society isn’t handling that well.

Until we abolish society’s patriarchal constructs, “motherhood,” especially for working women, will always be considered outside the status quo. I’m working towards changing that.

When I relaunched my website as I entered the freelance world last year, I branded myself as a writer and a producer and a mother. Was this a mistake? I don’t know. But what I wanted to project about myself was that motherhood did change me, for the better, and that if you were someone who wanted to work with me, you embraced that. I talk about my kids freely, and ask other parents about theirs, and I continue to be inspired and motivated at work because I feel fully realized at my desk.

We have to change society’s perception on motherhood. And that means recognizing that having and raising children is a feature, not a bug.